A London-based chambers has said ‘thanks, but no thanks’ to a traditional website in favour of a more eccentric online offering.

Vistors to the website of Whitestone Chambers — a recently-formed commercial set headed up by barrister Lawrence Power — are greeted with Harry Potter-esque magical smoke, which moves as you drag your cursor around the page.

There does, however, appear to be a number of typos on the new site, particularly on the set’s “capabilities” page. Take this extract under the heading “drafting”:

“We are specialist with documents that is how we were trained and what we continue to train together as a team. We do not do cut and copy. We think. We create. We solve. We work towards your goals when settleing contracts, structuring, creating compaies, M&A, joint ventures all baes on real, relevant research. If you are looking for true solutions based writers who understand the fundamentals of the written legal word then you have come to the right place.”

Issues aside, Whitestone’s recruitment page is also well worth a quick pit-stop. Users are taken on a journey across a rain-soaked cobbled road (think Game of Thrones meets Coronation Street) which, rather ominously, bears words such as “pupillage” and “tenancy”.

This isn’t the first time a chambers website has caught Legal Cheek’s eye: step forward London’s 15 New Bridge Street. In 2016, we noted that a member of the criminal set’s clerking team had punted for a very laidback profile photo. 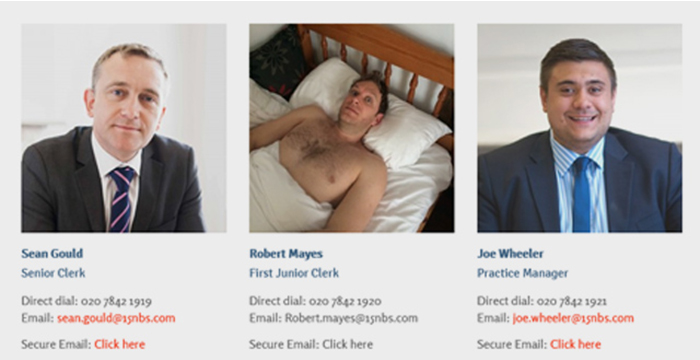 Sign up to the Legal Cheek Hub
Barristers Whitestone Chambers