You can still donate 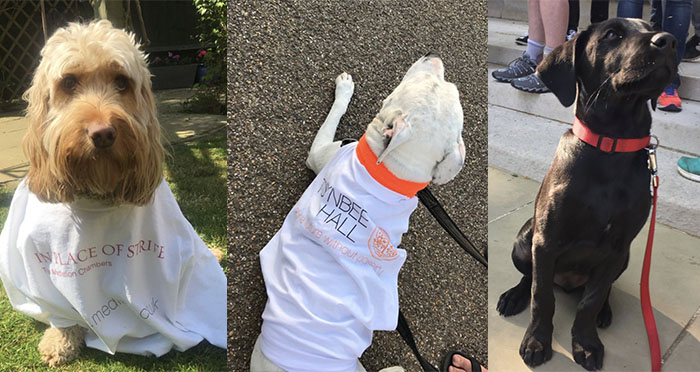 Feet sore from yesterday’s London Legal Walk? Relax, grab a cup of tea and feast your eyes on some of the best pics from the charity event.

It’s become compulsory to take a few snaps along the 10km route, which lawyers descend on each year to raise money for free legal advice centres across London and the South East. These include a photo with the king of lawyer selfies, Judge Rinder:

Rinder wasn’t the only legal celeb donning trainers yesterday evening. A number of Supreme Court justices, including the president, Lady Hale, took part in the charity get-together too:

‘Team Supreme’ are ready to take part in the London Legal Walk this evening in aid of the London Legal Support Trust. Included in the team are Lady Hale, Lord Mance, Lord Hodge and Lord Carnwath. Good luck to all walkers! o o #legalwalk

A cardboard bus adorned with lawyers’ headshots in the windows? Check.

Another great feature of the walk is the sheer number of dogs that take part every year. Here’s just a few from yesterday:

The @hardwickelaw walk team are so committed to the @londonlegal that Cassie the team mascot shows off her hula moves before setting off with @kirby_pj #londonlegalwalk pic.twitter.com/qR5KeJELz9

Bertie is suited and booted and ready to join the @MediateUK team for the @londonlegal walk today! Please sponsor him (and us!) for a very worthy cause here https://t.co/EktSg9E6dV #LondonLegalWalk pic.twitter.com/gwrOTQtPD4

There were so many four-legged friends, in fact, that this year’s walk even featured a “Dog Bar”.

There’s still time to donate to our team: you can sponsor us here.

Sign up to the Legal Cheek Hub
London Legal Walk