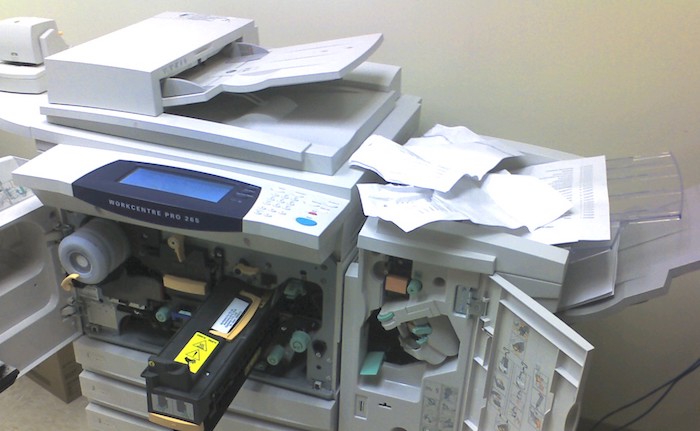 A series of frontline reports have been published by the Bar Council highlighting what happens when you slash funding — as the legal profession fights back in response to budget news last week that the Ministry of Justice will see further drastic cuts.

‘The Justice Papers’ are personal accounts of the justice system across the criminal, family and civil courts, and make for VERY grim reading.

Take, for example, Sarah Vine from Doughty Street Chambers writing about criminal cases. She portrays a system that is chronically short of judges, short of skilled lawyers, increasingly short of court buildings, indeed, short of something as simple and functional as a photocopier.

She says that “efforts to save money on judicial salaries and pensions now routinely leave criminal courts without enough judges to deal with the caseload”. And then cites “a lack of lawyers working for the CPS with the necessary experience to consider and prepare cases that have life-changing consequences for the people involved. She continues:

“They frequently do not have so much as a working photocopier at court or folders to put documents in front of a jury.”

Other shocking testimonies include this from Carmelite Chambers criminal barrister Joanne Kane:

“Most barristers can tell you a cautionary tale about the youth court. Perhaps they turned up at court to find their client terrified in a waiting room filled with members of opposing gangs.”

Meanwhile, Landmark Chambers‘ Richard Drabble QC highlighted the impact of removal of legal aid in housing cases, noting that “the employee without representation [in tribunal] will very frequently face an employer who has a lawyer — or someone from Human Resources — to put its case. This is an unequal battle.”

The Justice Papers follows hot on the heels of a troubling report from the Bar Council on austerity and the justice system in which its author, Professor Martin Chalkley, argues that cuts cannot be blamed on austerity alone.

According to the report, between 2008 and 2018 government expenditure has grown by 13% in real terms but ordinary funding for the Ministry of Justice has fallen by 27%. Worse still, if you focus in on the Criminal Prosecution Service (CPS), funding fell by 34% and by 32% for legal aid funding. Professor Chalkley concludes:

“That is a huge withdrawal of public finance support for what must be regarded as a fundamental and integral part of the state’s functions and obligations.”

The dire state of access to justice was also the subject of Lord Neuberger’s recent speech at Toynbee Hall to mark the 120th anniversary of its free legal advice centre. The former president of the Supreme Court highlighted the widening gap in access to justice and why legal representation is even more important in our times not less. He said:
“The regrettable truth is that, in an increasingly complex and diverse society, our laws are very detailed and are often amended … far too complex for even the great majority of well-educated and intelligent non-lawyers.” He continued:

“It is very hard to overstate the importance of being able to get legal advice and legal representation in the complex legal 21st century world which we now inhabit. If people cannot get advice about their rights, if people cannot enforce those rights when they are infringed, something has gone seriously wrong.”

Neuberger’s speech also outlined the role of lawyers and judges in realising access to justice. “It is not just the government who should be doing more to ensure that people have access to justice,” he argued, “it is also the legal profession and judges. We should be doing our best to ensure that legal advice and hearings in court and tribunals are as easily and cheaply available as possible and are as simple, and as user-friendly as possible.”