Just a day after MPs found it in contempt of parliament 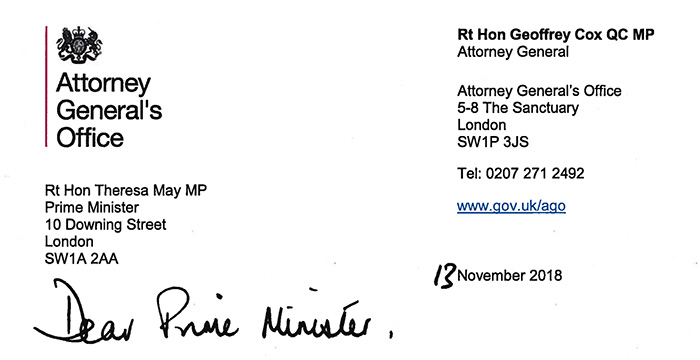 The Attorney-General Geoffrey Cox QC published the full legal advice on Theresa May’s Brexit deal this morning after the goverment was held in contempt of parliament yesterday for not doing so and only revealing a summary of the advice.

The advice, which is only six pages long, is being avidly read by MPs in the House of Commons in real time, suggests that because of the nature of the Irish backstop arrangement in the Brexit deal, the UK could be trapped in “protracted and repeated rounds of negotiations” for years ahead. Within moments, Sir Keir Starmer, shadow Brexit secretary, took to Twitter, arguing the advice revealed “central weaknesses” in the UK government’s Brexit deal.

The Brexit legal advice was requested by Starmer at the end of November on the grounds that MPs — who must vote on the Chequers deal in just six days’ time — are “entitled to know full legal implications of what the Prime Minister has signed up to. Full transparency and rigorous scrutiny essential” as he put it on Twitter.

But the Government dragged its feet on this. Only this morning, Andrea Leadsom, Leader of the House of Commons, told the Radio 4 Today programme that it was a “very important breach” of centuries of convention of legal privilege to publish legal advice in this way.

Leadsom warned that in the future: “Law officers advising Cabinet will be very reluctant to give any advice to government that they might then see published on the front pages of newspapers.”

Much of the legal community itself, however, appears to support the disclosure. Mark Stephens CBE, a partner at Howard Kennedy, tells Legal Cheek:

“This is not a private opinion, it is paid for by the taxpayer. MPs, who are not trained lawyers, need to be fully aware of the implications and ramifications of the Brexit deal from a legal perspective.”

In the wake of Leadsom’s comments, David Allen Green, solicitor and legal commentator, took to Twitter and wrote:

Legal privilege is not there for lawyers to give uninhibited advice to a client, but so that a client can be uninhibited in what they tell lawyers.

A lawyer will and should be uninhibited in any event. That is their job.

They do not need your protection.

In an interesting aside, Stephens noted that it is unlikely that Cox himself would have actually written the advice; it would be usual for an attorney-general to seek advice from a legal expert in that field. In the other famous disclosure of advice to the government over the Iraq War disclosed in 2005, though Lord Goldsmith was the attorney general at the time, it was the now-former LSE law professor and international law expert Christopher Greenwood QC who actually wrote the advice.

Stephens added: “The bar will probably spend much of the Christmas break trying to work out who it was that actually did the work!” For now, however, MPs and legal experts will be pouring over the 33 paragraphs of the advice to work out what it all means for the Brexit deal.

Sign up to the Legal Cheek Hub
Barristers Brexit Solicitors