Fortunately, I was never asked ‘sell me this pen’ 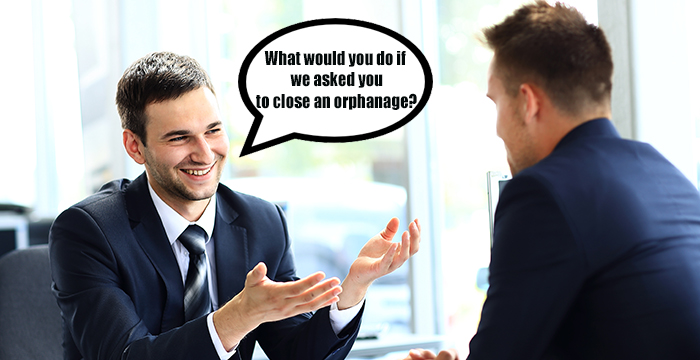 Training contract interviews usually contain all the obvious questions. Why this firm? What are the challenges facing the legal profession? Tell me about a recent news story? You can find a plethora of material on how to answer them online. The most difficult questions are the ones that take you by surprise. That’s why competency questions and Brexit don’t feature on this list.

By way of disclaimer, of course there is no single right answer to interview questions. These are all real questions that I have been asked by law firms and these are my own takes on them. Remember, it is the flair and the way in which you articulate your ideas that can sell your answer, even if it is poor. Be prepared, confident, and ready to think on your feet.

10. What other firms have you applied to?

This adversarial question is to see if there is any consistency in the firms you have applied to. Don’t say ‘the rest of the magic circle’ or a firm entirely different to the one you are interviewing at. Don’t throw shade at the interviewer — I’ve heard horror stories of people saying ‘it’s none of your business’ and it hasn’t gone down well.

I think it’s arguable to say you’ve applied to a variety of different firms (for vac schemes) as you want to be able to compare them to find your best fit. But I think by the training contract stage you very much need to show that you know what you want and can say ‘X, Y and Z firms because they all have [insert key common factors you’re attracted to].

9. A close friend and fellow trainee tells you that the late nights they have been working are only so they can charge their dinners to the client. What do you do?

Unfortunately, a good answer to this question involves throwing your mate under the bus and telling your supervisor or the compliance officer within the firm. I would advise all interviewees to read up on the Solicitors Regulation Authority’s Code of Conduct before a training contract interview. Trainees and solicitors have a duty to act with integrity and in the best interests of their clients. This type of behaviour breaches several provisions in the code of conduct.

8. What do you know about our firm?

I had spent 10 billion hours reading everything I could get my hands on related to the firm. I didn’t know where to start. The trouble with this question was narrowing it down into a cogent answer. Did they want me to talk about a recent deal? Strategy? Awards the firm had won? What year it was founded? What the managing partner’s favourite hobby was?

The key to this question is that you are not being asked WHY you applied to the firm. You should have a pre-planned, structured answer to this. I decided to pick two interesting things the firm had recently done that I could relate to myself. It doesn’t hurt to sound keen here.

7. How would you persuade a potential client to choose this firm over another, such as X LLP?

You won’t be responsible for bringing in new clients until you’re at partner level, but this question is probing your knowledge of the firm and what differentiates it from competitors. Don’t talk down the other firm — you want to sell your own services.

If you can recite Legal 500 and Chambers rankings that’s great but in most cases a client won’t care — they want the job done efficiently for the least cost possible. I focused on alternative fee arrangements and said I would highlight the firm’s experience in dealing with other similar matters. I also suggest emphasising some key personalities within the firm and explaining that they are the best at what they do.

6. If you could bring into force any law, what would that law be and why?

Finally, a question about the law! Actually, one you would expect at a pupillage interview rather than at a commercial firm. A clever candidate might pick a law that would help the firm or its clients, or something related to a current news story. But I think choosing something a bit left field could also work. It could demonstrate your personality and make you stand out. If you pick something you are passionate about, you can actually steer the conversation into an area you are very knowledgeable about, and impress the interviewer. I chose a law relating to victim’s rights.

5. A professor comes in for advice and tells you he has found the cure to a major disease and wants to protect his intellectual property. How would you advise him?

Having been asked this before beginning the Legal Practice Course (LPC), I didn’t deal with this question particularly well. In fact I remember having to be given several ‘prompts’ (this means you are not impressing).

The trouble with this question was setting its parameters. I had to ask the interviewers questions to gain more facts. This revealed that the professor made his finding whilst in the employment of a large pharmaceutical company (which has IP implications). This fictional character wanted to protect his IP and I suggested setting up his own company, which then led onto discussing how this would be financed. There were also moral implications (was the disease cancer? Could the professor monopolise the cure?) This was a hard question because it required recalling the law, business acumen and thinking on my feet.

4. How many credit cards do you think there are in the UK?

This was probably my favourite question I was asked. This one is all about seeing how you problem solve and think through an issue. No one is expected to know the answer, but you are expected to come up with an educated guess. I said I would begin by looking at the UK population, then break it up into the type of people likely to own a credit card (not young people). Then I realised that businesses can have credit cards too, and I actually know some people with 3 credit cards. I kept adjusting my number, speaking out loud as I worked through the problem. My overall figure was about 90 million, which is far too high. But I don’t think success in these types of questions is dependent on getting the right final answer. It’s about showing how you think.

3. Can you give me a definition of medicine?

Now we are getting into the solid questions. Of course, at a law interview I was wholly unprepared to discuss medicine. This is easy with Google in front of you, but on the spot it’s hard. I was able to muddle together a sentence about something you take to prevent illness and disease. But I had gone too narrow. ‘Is meditation medicine?’ I was asked. ‘Can religion be medicine?’ I had to decide yes or no, and adapt my definition accordingly. The key here is to pause and think your answer through. I finished with a suitable wider working definition (albeit far from polished).

2. What would you do if we asked you to close an orphanage?

I thought this was a particularly nasty one. Do you a) outright refuse and look insubordinate or b) say you would do it and look morally callous? This question really probes you as a person. How would you react if you were told to work on something you didn’t agree with?

The reality is that in practice this may be unavoidable. You can’t be naïve — if you’re applying to a large commercial firm then you will be representing corporate clients in matters you might occasionally feel uneasy about.

A variation of this question might be ‘how do you feel about Google or Starbucks trying to pay as little tax as possible?’ I would advise to avoid saying that you would leave your moral compass at the door and give your honest answer to this question. Don’t try and say what you think the interviewer wants you to say.

1. The client calls you just before a deal is to be closed and wants to change something in the contract. Your supervising partner is on a long flight and won’t be available until tomorrow.

In at the top spot is this particularly difficult problem-solving question and I still do not know the ‘correct’ answer to it. I said that I would go to someone else in my department, or another partner, and ask for advice. But the interviewers said that NO-ONE else was available for advice.

So, if I couldn’t ask anyone, I could either make the change, or let the deal close and leave the client unhappy. A third option might be to negotiate an extended deadline?

Either way, I’m no risk taker, so I definitely wouldn’t make the change myself (if a trainee is even allowed to do such a thing). I don’t want to open the firm up to any litigation or ruin its reputation. In hindsight, I should have asked whether the change was minor (a comma being moved) or something substantial. I thought this question was very unrealistic — in real life you would be able to ask your colleagues for advice. I still don’t know what answer the interviewers were looking for.

Fraser Collingham is a University of Nottingham law graduate. He is currently studying the LPC at the University of Law and is due to commence a training contract at an international law firm later this year.