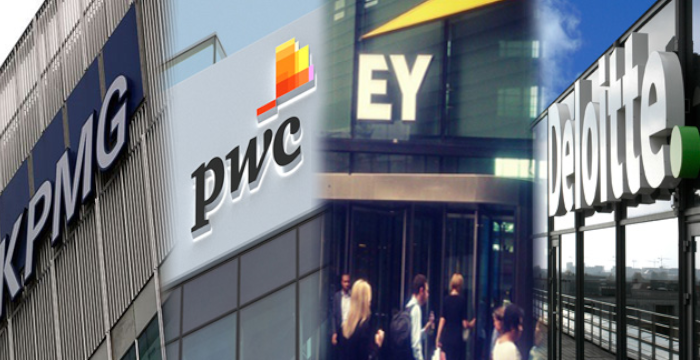 The Big Four accountancy giants should be made to split their fast-growing legal practices from their audit work, an influential government regulator recommends today.

Deloitte, EY, KPMG and PwC need to put strict Chinese walls between their professional services people and their auditors in order to improve the quality of their auditing, according to the Competition and Markets Authority (CMA).

The regulator has been looking into the structure of the audit market amid concerns that the Big Four firms are too dominant despite not doing a very good job.

One of the CMA’s four recommendations is an “operational split” between audit and professional services within each firm. None of the Big Four are solely focused on accountancy any more, with things like management consultancy and — increasingly — legal services making up a larger share of the business than old-fashioned bean counting.

The CMA wants the audit business to have its own chief executive and board of management, with no profit sharing between the two sides of the business. That way, it reckons, management of the audit business will be able to focus on doing their clients’ accounts properly, rather than being distracted by shiny professional services activities.

One non-audit insider at Deloitte told Legal Cheek: “Generally I think it’s a good idea. The Big Four have become too powerful”.

The regulator decided not to recommend that the non-audit businesses be spun out completely. It thinks that an internal operational split, falling short of separation into two new firms, will be enough. The CMA also declined the radical step of banning the Big Four from the legal and professional services market altogether.

All this could happen within 12-18 months, if the government were to back it. The CMA points out that “the audit firms have all the expertise needed to implement this remedy quickly and effectively”.

All four accountancy giants now have a bridgehead in the UK legal market, with Deloitte the last to pick up its alternative business structure licence last year. In November 2018, KPMG announced plans to double its global complement of lawyers to 3,000 — which would make it one of the biggest law firms on the planet.

In a way, this would only be a reversion to type for the Big Four’s lawyers. PwC Legal was a separate entity as recently as 2016, as a committee of MPs pointed out in a separate report published earlier this month.