An Irish law school has apologised after sending an “ill-judged” tweet to a student who expressed concerns over exam timetabling and the impact it could have on her classmates’ mental health.

Taking to Twitter over the weekend, a law student at Maynooth University in County Kildare, Ireland, voiced her worry at a decision to schedule land and equity exams “the day after each other”. Directing her criticism at Maynooth Law School, the student also questioned whether those responsible for the exam timetable had “considered the mental health” of law students.

The law school responded, stressing it wasn’t responsible for the timetable, before going to reassure the student that her hectic exam schedule “shouldn’t be a problem”, provided she’s not left her revision to the “last minute”. 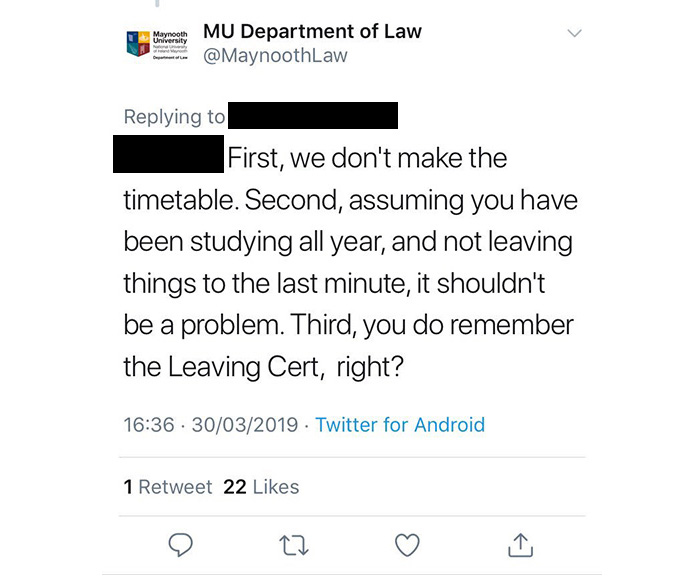 In the wake of a backlash against its response, the law school deleted the tweet and issued an apology to the student. It said it was “intended to be funny” but was “ill-judged and unthoughtful”. The law school added:

“Crucially, it does not reflect our approach to student support, which we treat with the utmost importance, at all times.”

Responding to the apology, one student wrote: “Absolutely not good enough”, while another commented: “‘It does not reflect our approach to student support’ Wrong. It a pervasive attitude in law that *starts* in universities and continues among law firms. It was actually a revealing moment of truth.”

Last year, research produced by the Junior Lawyer Division (JLD) found that over a quarter of Legal Practice Course (LPC) students (27%) had suffered “severe” or “extreme” levels of stress. The findings — which were based on the responses of nearly 1,000 lawyers, trainees and students — cited “high workload” as the biggest contributor to poor mental health.

Sign up to the Legal Cheek Hub
Maynooth University Students