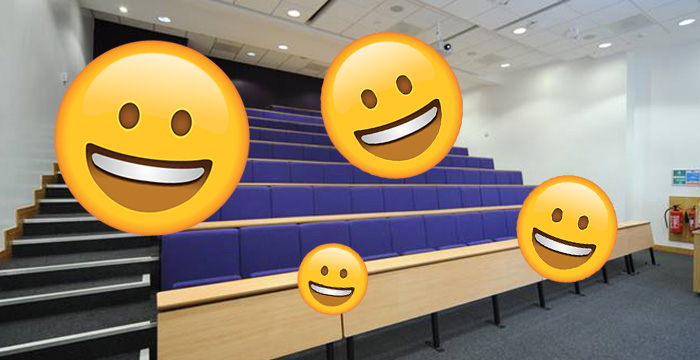 The country’s happiest law students are at the University of Lincoln, Legal Cheek can reveal. Analysis of a nationwide survey of undergraduate students shows that 95% of Lincolnites are happy with their legal studies, more than any other major law school in the UK.

The results come from the National Student Survey, a major poll asking final year undergrads about their uni experience that can be broken down by university and subject. This year 330,000 students completed the survey, which is carried out by the Office for Students.

Behind Lincoln, Glasgow and Aberystwyth came in second and third, scoring 94% and 93%.

Also performing strongly in the survey was The University of Law, which placed in the top ten for five out of eight categories of the survey (‘teaching’, ‘learning opportunities’, ‘academic support’, ‘learning resources’ and ‘student voice’).

We’ve ranked the top performers below, leaving out unis where fewer than 50 law students responded.

Perhaps surprisingly, the elite Russell Group unis only landed only a handful of the top spots. The likes of Durham (80%), LSE (79%) and Manchester (73%) are well off the pace when it comes to law student satisfaction.

Oxford and Cambridge are not included, as their students boycotted the survey altogether. Oxbridge did come out on top of a recent Guardian ranking of law schools, followed by UCL, Dundee and Solent.