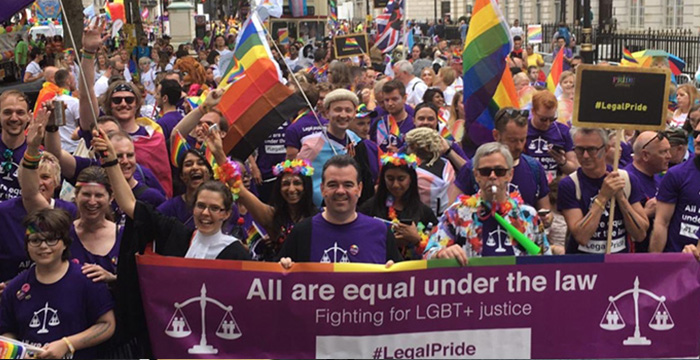 Lawyers were among the tens of thousands to take to the glitter-laden streets of London this weekend to march for lesbian, gay, bisexual and transgender plus (LGBT+) rights at this year’s Pride parade.

Members of the legal profession painted the City all colours of the rainbow at the flagship London march on Saturday to mark 50 years since the Stonewall Uprising in New York — the notorious riots which helped kickstart the modern Pride movement.

Some have been sharing their social media snaps using the hashtag #LegalPride and we’ve rounded up the very best.

The chair of The Bar Council’s Young Barristers’ Committee, Athena Markides, joined treasurer Grant Warnsby under the banner ‘All are equal under the law’.

Today’s the day – Chair of our Young Barristers’ Committee, Athena Markides, and our Treasurer Grant Warnsby march alongside @TheLawSociety and @CILExLawyers at #LegalPride today pic.twitter.com/QMHj4ibDi8

Wigged and robed barristers representing diversity initiative FreeBar were among this year’s parade-goers.

It was rainbow flags galore as the Inner Temple team took to the streets.

While the Solicitors Regulation Authority’s (SRA) Pride bus made an appearance again.

Our Managing Partner, Donna Tilbrook, is proud to be attending and supporting #prideoflondon with the SRA Legal bus! We hope everyone is enjoying #pride2019 ? #legalpride #londonpride

Many marched wearing ‘All are equal under the law’ T-shirts.

It was high fives with the crowd for Hardwicke property silk Brie Stevens-Hoare QC. We wonder if she makes her court entrances this way!

Or perhaps this rather eye-catching bicycle could come handy?

So many ? #Pride marches to go to with @AmandaIlling and now we have worked out how ? pic.twitter.com/VwMo9WMeFy

Hardwicke barristers show their support to trans-inclusive gays and lesbians with colourful capes.

Is anyone else wondering how Tanfield Chambers barrister Gwyn Evans managed to fit a rainbow cowboy hat over that huge horsehair headdress?!

It looks like the children of barristers at family law set Coram Chambers joined in on the action too. We’re loving those rainbow fairy wings!

While others sported glitter beards.

A colourful array of legal textbooks makes for a very aesthetically pleasing snap.

It was rainbow cups and sarongs for one Legal Pride first-timer.

And a colourful crop top for another.