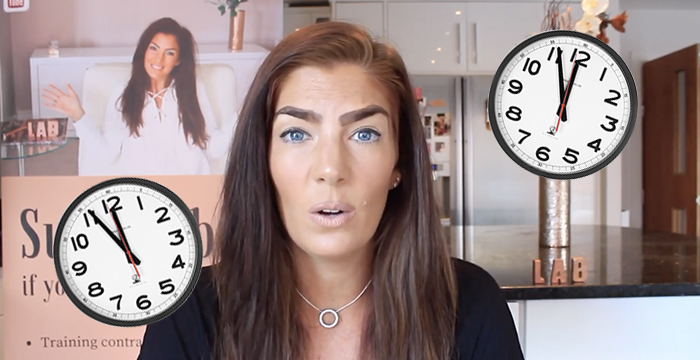 This month trainees up and down the country commence their two-year training contracts. To help them find their feet in firms one junior lawyer has released an informative vlog dishing the down-low on time recording.

Irwin Mitchell solicitor Chrissie Wolfe’s latest offering, ‘Law: Time recording 101’ (embedded below), was uploaded to the vlogger’s popular YouTube channel this week. “I made the video to highlight some of the pitfalls to junior lawyers just starting their journey to hopefully help them avoid them,” Wolfe explained to Legal Cheek.

Set against the backdrop of her plush-looking apartment, Wolfe speaks candidly about time recording — “the greatest culture shock of becoming a lawyer” — in the ten-minute long clip. She explains the concept in a nutshell: solicitors must record and account for the time spent working on a client’s file which is billed by the hour.

But Wolfe, who specialises in personal injury law, admits, “nothing really prepares you for it during your law degree or [Legal Practice Course] LPC. You learn a lot about black letter law and about the practical skills of being a lawyer but no one really prepares you for the administrative burden of being a lawyer, and time recording is arguably the biggest one and one I still really struggle with.”

With this in mind the YouTuber, who has amassed 2,500 subscribers and almost 90,000 views, advises bright-eyed trainees (who have lower target hours than qualified associates) aim for the same number of hours they’ll be billing once qualified. She shares two reasons for this: “One, you will smash your trainee target which makes it even more likely you’ll be retained and two, it means that you won’t have so much of a jump when you become a qualified solicitor.”

Another handy tip Wolfe shares is to record “absolutely everything” on what will typically be firm-provided software. She advises not to wait until the end of the working day to input your time entries because “the chances are you’ll have forgotten half of it, your time estimations will be inaccurate and you’ll be in a rush to do it because you’ll want to get out of the door.”

Wolfe, who is now four years qualified, also reveals she would “under-record” her time because she’d feel “embarrassed” by the length a task would take. She told Legal Cheek:

“I particularly struggled with feeling like I was taking too long to complete tasks so I would often under-record the time I had spent. I then had to make a massive adjustment when I qualified given my increased target and I wish now that I had made it sooner and had more confidence in myself from the outset.”

After divulging her advice Wolfe sums up by showing viewers how she submits her time entries using software 3E.

Wolfe regularly shares short vlogs on law and lifestyle channel ‘Law and Broader’ alongside her day-job. Last month she revealed how she made it to practice despite scoring shaky A-Level grades.