A recent law graduate with no solicitor or barrister has persuaded the High Court to hear a potentially historic challenge to a key bit of welfare benefits law.

Michael Connor, who finished his Legal Practice Course (LPC) just last year, has been granted permission for a judicial review of a rule that stops people appealing when denied benefits unless they’ve asked for an internal review.

Staffordshire Uni grad Connor is crowdfunding to take the case to a full hearing and has appealed for pro bono support, as he doesn’t have the cash to fund the expensive litigation himself.

The case is about the so-called “mandatory consideration rule”. It affects people denied benefits like Jobseeker’s Allowance, Personal Independence Payment or Universal Credit.

Under regulation 3ZA of the Social Security and Child Support (Decisions and Appeals) Regulations, created in 2013, people refused benefits only have a right to appeal to an independent tribunal if they have asked the Department for Work and Pensions to reconsider its decision.

William Ford of Osbornes Law, who won the social welfare category of the Legal Aid Lawyer of the Year awards this year, told Legal Cheek:

“In an era where legal aid is not available for the vast majority of welfare benefit cases, the mandatory reconsideration rule operates as a further procedural barrier to claimants challenging benefit decisions”.

As Connor puts it, “if a person has been wrongly denied benefits they have to wait until the benefit office have done a lengthy, pointless review”. He argues that this is contrary to human rights law.

A High Court judge has now agreed that “although it is difficult to challenge legislation, there is some force in the submission that a rule which precludes access to statutory rights of appeal until after determination of a mandatory reconsideration, rather than when it should have been determined, is a disproportionate barrier to access to a court”. 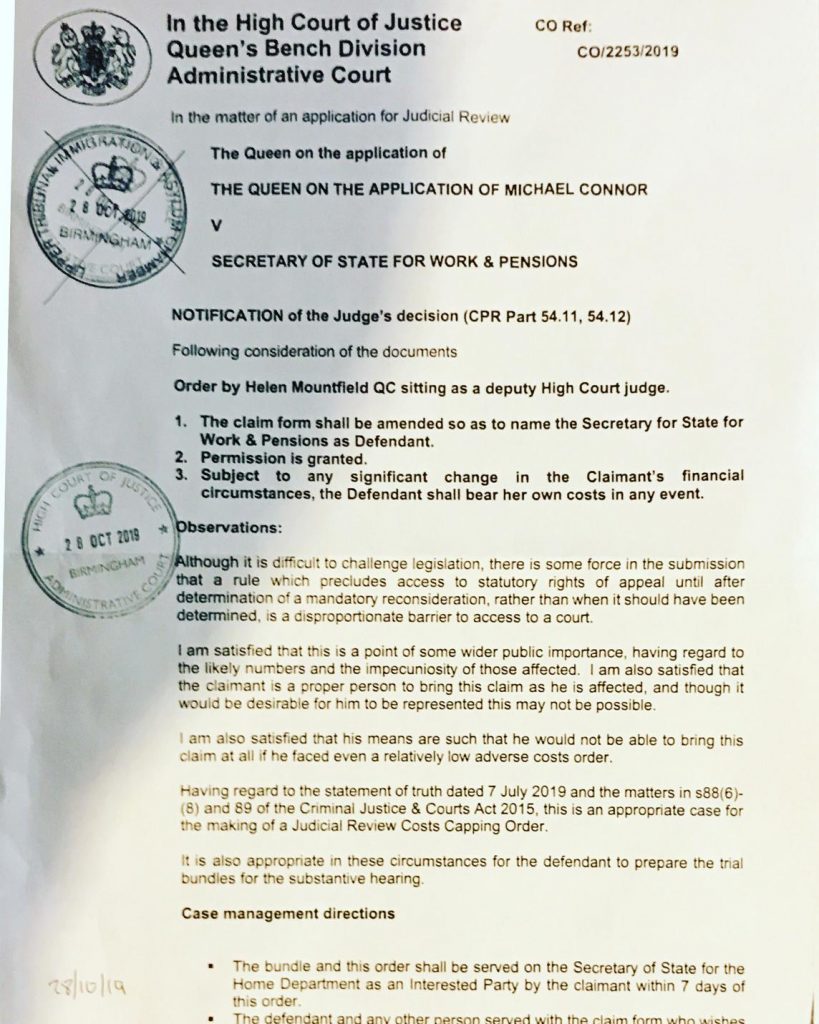 A July 2019 report by the Child Poverty Action Group said that mandatory reconsideration requests can take up to six months to be processed. While the process is supposed to take 40 days, the report found that “many claimants wait significantly longer than this to receive a mandatory reconsideration notice, which can cause significant financial hardship as well as stress and worry”.

Ford said that “there is also evidence of the DWP refusing to accept late requests for mandatory reconsiderations so that appeals to the Tribunal do not proceed”.

Connor only completed his undergrad law degree in 2017, but has many years of experience as a welfare advisor. He put them to good use in getting permission for the case to proceed, despite being a litigant in person with no qualified lawyer in his corner.

He has appealed for a barrister willing to pitch in with the case, as well as seeking £3,000 via Crowdfunder.

Connor says that “As the film I, Daniel Blake, highlighted many people die before their appeal is eventually heard”, adding that “if my legal action is successful this unfair law will be quashed”.