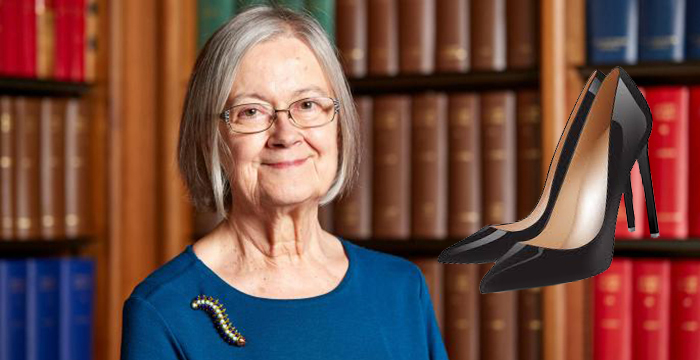 A number of City law firms have questioned some of the headlines generated in response to Lady Hale’s comments about women being made to wear high heels at work.

In an interview with the Evening Standard on Friday, Hale, 74, who stepped down from the UK’s top bench last week, criticised employers that force female lawyers to don a pair of high heeled shoes in the workplace.

“[O]ne does again hear stories of women being required to wear high heels by employers,” she said. “Why should they have to wear high heels? Requiring neatness, tidiness, cleanliness is one thing, requiring a particular image is another.”

Hale, who made her comments as part of a renewed call for greater equality within the legal profession, warned that women in law were still being held back by antiquated attitudes to workwear and that men would not be subjected to a similar policy.

Surprised that the brooch-wearing Baroness, who until yesterday was the country’s most senior judge, had focused her attention on female footwear, we went to various City law firms to see whether this truly is the case.

It is perhaps unsurprising that all of the City firms that responded to Legal Cheek confirmed they have no formal policy on the matter, and that lawyers are not expected nor required to wear high heels at work.

Some of the firms we approached firmly rejected having such a policy in place for this would directly contravene their inclusive culture, while others advised they simply require employees dress in professional and appropriate business attire that does not stipulate wearing stilettos. In some, a ‘dress for your day’ policy is in place, where lawyers are encouraged to wear clothes based on their schedule for the day, and when meeting with clients, to dress in line with their expectations and the industry they work in.

We spoke to Irwin Mitchell solicitor and vlogger Chrissie Wolfe, who has filmed a number of workwear ‘edits’ on her YouTube channel, ‘Law and Broader’. She told us:

“My firm has a pretty modern attitude and there is no requirement or expectation that you wear heels to work everyday. If I have a meeting or court then I personally prefer to wear heels because I think I look more professional and it is still the norm that most clients and industry professionals would expect in those circumstances.”

So it seems we’ve come a long way since 2008 when magic circle member Freshfields took a hammering in the press for reportedly advising its staff to “embrace” their femininity by wearing heels.

In addition to her comments on female footwear, Hale, who has headed the Supreme Court since 2017, revealed ambitions to use her retirement to write a memoir. Hale will also take up an honorary position as a professor of law at University College London.

Junior lawyer event: How to build a career at a US law firm in London, with lawyers from Cleary Gottlieb, Kirkland & Ellis, Shearman & Sterling and Skadden — this Thursday evening: REGISTER TO ATTEND
Judges Law firms Solicitors