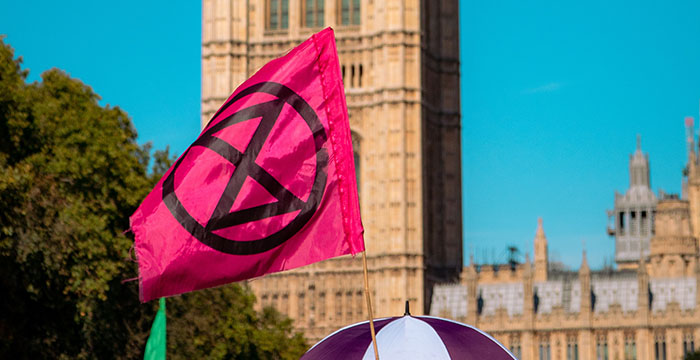 Extinction Rebellion protestors will descend on Slaughter and May‘s London HQ on Friday in protest over the magic circle firm’s links to the oil and gas industry.

In a event post on Facebook, Lawyers for Extinction Rebellion — a group for lawyers, legal professionals and law students interested in climate change activism — will gather peacefully outside Slaughters’ Bunhill Row office to “discuss with employees and passers by this legal firm’s significant and enduring role in the climate crisis.”

The post, “Stop ‘Slaughtering’ our Planet!”, goes on to say that many Legal 500 firms represent businesses in the oil sector, “the very companies that are fuelling the #ClimateEmergency”.

In a statement, the group revealed it plans establish a “crime scene” outside the office, hand out flyers and engage in conversation with the public.

It added: “The legal community has an ethical obligation to take all possible steps to reduce carbon omissions [sic] and it is incumbent on the biggest players to take up the biggest challenges.”

Legal Cheek reported earlier this month that a group top lawyers produced a series of climate-focused contract clauses and laws, as part of a pro bono initiative set up in response to mounting environmental concerns. One example includes a clause on terminating a contact in favour of a more climate-friendly supplier and a provision on climate sabbaticals.