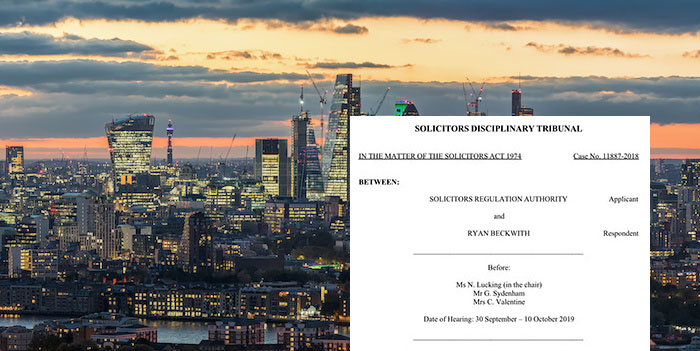 The Solicitors Disciplinary Tribunal (SDT) has this afternoon revealed its reasons for choosing to fine rather than suspend ex-Freshfields partner Ryan Beckwith, who last October was found to have engaged in sexual activity with a junior female colleague.

Beckwith, a former restructuring and insolvency partner in the magic circle player’s London office, was fined £35,000 and ordered to pay £235,000 in costs.

Now justifying its decision to fine Beckwith, the tribunal said his misconduct was the result of a “lapse in his judgement that was highly unlikely to be repeated”. It also found that Beckwith, a married father of one, did not pose “a future risk to the public”.

An SRA spokesperson said: “We are reviewing the judgment and will then decide on next steps.”

You can read the full 50-page judgment below: