‘Much more work to be done’, says SRA chief

The statistics, recently released by the Solicitors Regulation Authority (SRA), show firms which mainly do corporate law have the lowest proportion of state-educated solicitors, 46%. By contrast, nearly four fifths (79%) of solicitors in firms doing mainly criminal work are from state school backgrounds.

The findings come from its biennial collection of diversity data, completed last summer. With a 96% response rate, this represented 186,000 people working at 9,500 law firms across England and Wales.

The social mobility problem isn’t exclusive to the solicitor profession. Earlier this year we reported on statistics produced by the bar regulator showing that 34% of barristers attended a UK independent school.

Elsewhere, the SRA stats show diversity data on the percentage of female and ethnic minority solicitors.

Nearly half of all solicitors are female (49%) but this varies significantly with seniority. One in three (34%) of partners are female, compared to women accounting for more than half (59%) of solicitors working at non-partner level.

The proportion of black, Asian and minority ethnic (BAME) lawyers working in law firms is 21%, as per below. 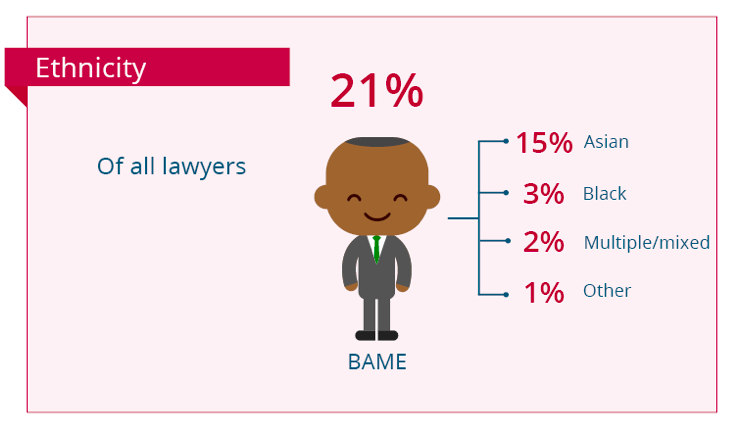 The latest figures also show a potential under reporting of disabilities within the profession. Just 3% of respondents described themselves as disabled, compared to 13% of the employed population.

For the second time the SRA has collected data on transgenderism in the legal profession: 2% of solicitors, 1% of partners and 2% of other staff have a different gender identity to what was assigned to them at birth. This hasn’t budged since the previous findings.

Another key takeaway found by the regulator is almost half (49%) of lawyers are Christian, while 30% have no religion or belief.

“A diverse and inclusive legal profession which reflects the wider community is not only good for the public but for legal businesses themselves. That is why it is encouraging to see progress continuing across many areas, although there is clearly much more work to be done.”