Both since handed police cautions

A Northumbria University law student has come under fire from her classmates after she posted her boyfriend’s racist rant on her Instagram, in a move which has led to them both receiving a police caution.

Personal trainer Richard Heslop can be seen making a number of racist and offensive remarks in viral footage which appeared on his law student girlfriend’s Instagram story. The first year undergrad, who Legal Cheek doesn’t see much point in naming, has been widely criticised online over her failure to challenge Heslop’s rant during the footage, on several occasions even smiling. She doesn’t, however, make any offensive comments herself.

The student is understood to be in her first year of her LLB (Masters) at Northumbria Uni and appears to have deleted her Instagram account. This comes after the original clip was re-shared widely across various social media platforms. Part of the footage (embedded below — please note it contains extremely offensive content) remains online via an unassociated account.

Responding to the social media backlash, before appearing to delete his own Instagram account, the law student’s boyfriend purportedly offered the following explanation: “I think by the tone of my voice on that vid you realise I’m impersonating someone and you can tell I’m not being serious.” 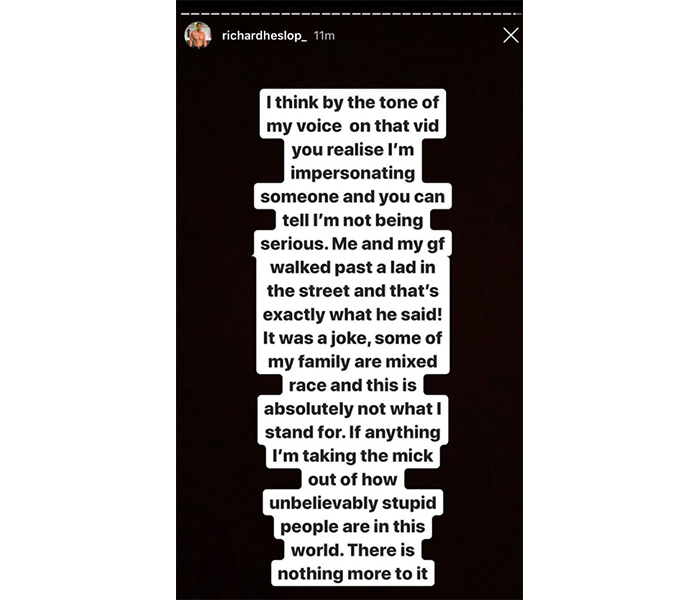 “For someone that is studying a law degree, this behaviour is not compatible with the profession, or any profession as a matter of fact. Northumbria University expects students to conduct themselves in a proper manner in line with the policies and regulations. For a law degree, especially the MLaw course that is regulated by a professional body, the actions of this student clearly demonstrates their character and suitability is in need of questioning. As an aspiring member of the legal profession, [the law student] has shown a lack of understanding and integrity.”

Accompanying the letter is an online petition which has so far received 487 signatures. The open letter continues:

“Following the circulation of the video over social media platforms, I cannot imagine that [the law student] will have much of a respectable legal career to pursue at all, given the behaviour raises ‘fitness to practice’ concerns. To allow this student to continue on with a degree, where the profession holds them in a position of trust with the public, will be an absolute disgrace and mockery. Northumbria must not condone this behaviour.”

In a more serious development, Northumbria Police today confirmed that both individuals who featured in the video had been issued police cautions.

“Today the two people who featured in the video attended the police station and were interviewed by detectives,” a spokesperson for Northumbria Police told Legal Cheek. “Both individuals apologised for their behaviour and were remorseful over the impact of their actions, they have both been issued police cautions.”

“The type of language used in the video is completely unacceptable and we have made that clear to these two individuals. Whenever we are made aware of discrimination of this nature then will not hesitate to take action. We would encourage anyone who becomes aware of this type of behaviour contacts police and we will treat it as a hate crime.”

Meanwhile, a spokesperson for Northumbria University said: “After being made aware of posts shared on social media involving someone who is alleged to be one of our students, we immediately reported this incident to the police. We also announced that we would be undertaking our own internal investigation, following the conclusion of the police investigation.”

It added: “The University will investigate in line with its own formal disciplinary processes, outlined in our student regulations. Appropriate action will be taken in line with our policies. Northumbria University does not condone any of the comments in the posts. They do not reflect the views of the University. We do not tolerate any form of abuse, harassment, or discrimination.”