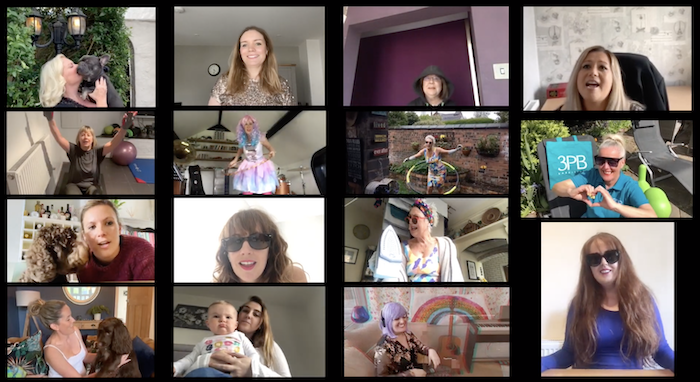 An ensemble of family barristers at 3PB have shown off their lip-syncing skills in a Foo Fighters inspired music video.

The clip spoofs the BBC Radio 1 star-studded music video of Foo Fighters’ Times Like These, the charity cover which saw pop icons each perform the song separately from their homes under lockdown.

In this fun parody (embedded below) members of 3PB’s family team each sing and dance along to the hit single, paying homage to the likes of Dua Lipa, Jess Glynne, Sean Paul, AJ Tracey and Chris Martin.

Fully embracing the spirit of Radio 1’s Live Lounge, the miming lawyers can be seen performing in their living rooms, kitchens, bedrooms and back gardens, where they lip sync into a mix of hairbrushes, wine bottles and scrubbing brushes. A bunch of barristers also swap the formal court wear for studio-like headphones, backward-facing baseball caps, multi-coloured wigs and pairs of pop-star sunnies (worn indoors of-course).

While some pretend to play along with musical instruments, others use props they had to hand — including a rowing machine, a pair of dumbbells, an iron, a hula hoop, and a dog dressed as an alien.

Filmed at the height of lockdown, the parody was “initially produced as internal, feel-good video”, a 3PB spokesperson tells Legal Cheek. The video has since been viewed over 3,400 times on YouTube.

The parody follows other efforts by musically-gifted lawyers to lift spirits under lockdown. As reported by Legal Cheek, last week the CMS choir debuted their original serenade to lawyer life. Earlier on in the lockdown, a criminal law teaching fellow at Keele University and former solicitor channeled her inner Eminem in criminal law rap.