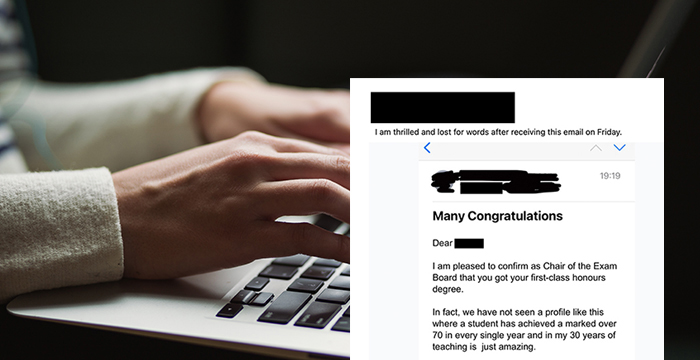 The grammar of the University of Wolverhampton has been called into question this week after an “informal email” it sent to one of its top-performing students went viral on LinkedIn.

The short email, sent by the uni’s academic team, informs the student that she has successfully secured a first-class result in her undergraduate law degree, before going on to describe the achievement of landing marks of 70 and above in each year of her studies as “amazing”.

Relaying further praise, the note labels the aspiring barrister’s consistently high marks as “the most exceptional profile [the university’s external examiner] has ever seen”.

To highlight the academic milestone the Wolverhampton grad posted a redacted version of the email on LinkedIn. The post is nearing 70,000 likes and comments.

While the vast majority of responses were positive, a small number of commenters appeared to question the authenticity of the email due to its somewhat clunky language and poor grammar.

This led the University of Wolverhampton itself to enter into the comments section of the grad’s post to confirm via its official account that the “informal email” is a “genuine message” from its academic team.

“We felt she should know how impressive her work was and were delighted that, in these difficult times, we had some good news to share,” the uni writes from its official LinkedIn account. “We are proud of all of our students’ achievements and wish [the graduate] and all of her classmates all the very best in their future careers.”