Money and law have always had a complicated relationship 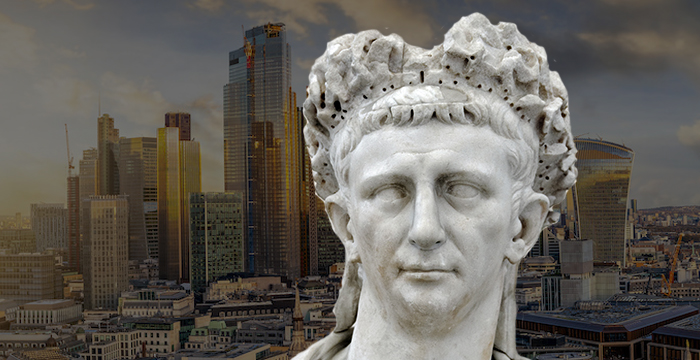 In the first installment of a new mini-series that provides a historical perspective to the legal quandaries of the present, future magic circle trainee Will Holmes takes a look at lawyers’ relationship with money throughout history and asks whether we should be worried about the latest Big Law salary war.

The lawyer and senator Publius Suilius Rufus was notorious throughout the Roman Empire for his recklessness, avarice and corruption. The Wolf of Wall Street of his day, Suilius delighted in extorting payment from his clients. He was known for charging huge retainer fees of around 400,000 sestertii and often later betrayed his client, unprofessionally selling out to adverse party if the money was right. Deemed a sign of the legal profession’s moral decay, Suilius was shamefully exiled from the Empire under Nero’s reign.

But, in light of the recent salary hikes across the City, Suilius’s money-grabbing mentality might no longer be considered so scandalous or even noteworthy today. The latest wave of the City law pay war is set to leave junior lawyers’ eyes bulging with dollar signs and future wannabe lawyers keenly rifling through salary lists more than ever before. After Millbank‘s announcement at the beginning of June, US firms have revised London newly qualified (NQ) pay to north of $200,000 (£144,000) and their magic circle competitors are also splashing the cash.

Money and law have always had a complicated relationship. In a formalised system, where legal education is time-consuming and costly and the work is laborious, it is entirely reasonable that lawyers are well remunerated. Indeed, this is exactly the response that Suilius gave to Emperor Claudius when his reputation caught up with him in 47 AD. Indeed, Suilius went even further, brazenly asserting that a lawyer had as much a right to all the compensation he could possibly obtain just like a Roman soldier had to booty and plunder when victorious on the battlefield.

But Suilius was far from blind to the counterargument. News of his corrupt behaviour had led the Senate to debate lex Cincia (204 BC), the presiding regulation of legal payment, in the presence of Emperor Claudius. This law officially outlawed payment for legal services, but it was famously ineffective. By 200 BC, legal fees had become common practice and if scrutiny ever emerged to trouble lawyers, loopholes such as expensive gifts and donations were used to circumvent the regulation.

On realising that the debate looked likely to result in the abolition of lex Cincia and the system that had so benefitted him, Suilius suddenly U-turned on his position. He waxed lyrical about the role of the lawyer in society, citing examples of famous morally praiseworthy lawyers whose work was motivated by public service, a sense of duty to the empire and honour. Losing sight of this moralistic culture in the legal profession would be disastrous for justice.

Many practitioners rallied against Suilius’s argument that implied Rome should return to the days when lawyers typically worked for free. Ultimately, Claudius opted for a compromise: lawyer’s fees were to be capped at 10,000 sestertii. Surprisingly, this remained a prevalent threshold in the minds of Roman lawyers for the next 250 years, although it was at times disregarded.

What Claudius’s decision demonstrates is the importance of questioning our legal culture. It is clear that overly money-centred legal culture is neither functional nor desirable. But it is also clear that lawyers should not work for nothing, especially with the demands of the profession and the pricy educational barriers to entry.

Should we be worried? We have come a long way from the medieval communal culture that first bound England’s four inns of court. And there are signs of the frailty of our current system. As John Morley points out, the collapse of Dewey & LeBoeuf in 2012 revealed the “deep connection between partner ownership and the values of friendship, loyalty, and trust”. As the former Chair of Dewey realised, “if it is only money that holds a firm and its partners together, then there is really no glue at all”.

The Big Law pay war still rages today. But, as Emperor Claudius discovered, we must watch carefully to see if this deteriorates our legal culture or beneficially makes it more attractive.