As City lawyers today teem over their financial results, future trainee Will Holmes suggests they should spare a thought — a prayer even — for the Satanic lawyer and the creation of purgatory 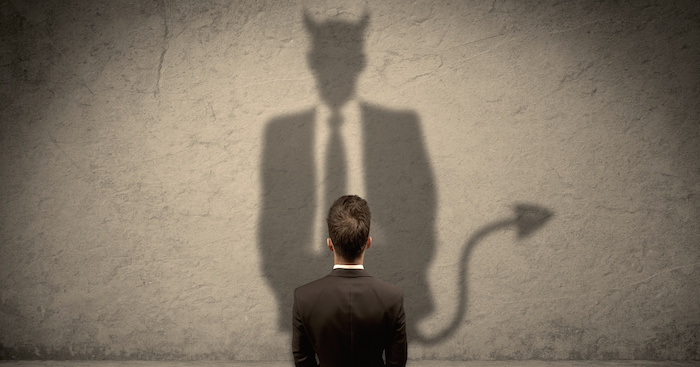 In the latest instalment of a mini-series that provides a historical perspective to the legal quandaries of the present, future magic circle trainee Will Holmes considers the influence of the notion of Purgatory — embodied by the textbook story of “The Devil’s Lawsuit” — and suggests that this laid the foundations for the rise of BigMoney law.

A 14th century law school classic was the work Processus Sathanae (“The Devil’s Lawsuit”). In this text, we hear the story of the devil’s lawyer going through some legal admin procedures, bickering with Christ about the timing of hearings, getting annoyed at court delays before finally being able to make his case to sue for legal title over the human race who his client wishes to see damned.

Unfortunately for the Satanic lawyer, the Virgin Mary suddenly appears as humankind’s advocate. In a highly theatrical and technical debate, the devil’s advocate appears to have the upper hand until Mary gets personal. In tears, she makes an emotional appeal which sways the judge, who in this case is her son Jesus Christ, whilst the meticulous rule-following Satanic lawyer complains grumpily about nepotism: “I say to you that flesh and blood, not celestial justice, have been revealed by the Son”.

So, what is the significance of this story that seemingly goes against the virtues of a good advocate? The tale is symbolic of the influence of the then newly created concept of purgatory in the legal system. Purgatory had the effect of centring the law around flexible moral principles. It created a third option — a form of restorative justice — in between Heaven and Hell that enabled many to undergo a process of repentance for their sins or crimes. The Satanic lawyer, who narrowly interprets laws in fine detail, therefore fails to understand the importance of mercy — a value that Mary traditionally embodied — in justice.

The development of purgatory is important to lawyers today for two reasons. First, it enabled a moral shift that was a pre-condition for the major commercial boom in the Renaissance. As Jacques Le Goff underlines, purgatory was necessary for merchants, money-lenders and other key proponents of capitalism. Traditionally, earning interest on a loan also earnt you a spot in Hell, as Dante describes in his Divine Comedy. This stemmed from the Aristotelian belief that “the most hated sort [of money-making] is usury, which makes a gain out of money itself, and not from the natural use of it”, and was also a violation of the Roman legal understanding of a loan. However, the Church’s increasing need for money saw important mendicant religious orders, such as the Franciscans and the Dominicans, U-turn on the issue of usury. By 1462, for example, the Franciscans had opened a string of state-owned pawnshops (monti di pietà) offering cheap loans in money, wheat and livestock.

As the concept of Purgatory gained momentum, the forefathers of today’s MoneyLaw clients were desperate to have a shot at redemption. Bankers were known to flagellate themselves in front of their workplaces to demonstrate their repentance. Others, such as the successful Siennese bankers Bernardo Tolomei and Monte Olivetto Maggiore became hermits, whilst the infamous Florentine merchant Francesco di Marco Datini (perhaps the Jeff Bezos of his day) left the vast majority of his money to public Florentine institutions. Eventually, this paved the way for the growth of capitalism and the creation of the clients that have made the legal sector the multi-billion-pound industry that it is today.

Second, lawyers were able to remove the stigma around getting rich from the law. The formalisation of Canon Law led to the development of the legal professionals. Universities in Bologna and Paris were tempting many students away from theology and into the increasingly lucrative legal profession. Fearing a brain drain from the theology route, theologians and religious figures did much to stigmatise the new industry.

To this end, in 1139 Pope Innocent II exclaimed at the Second Lateran Council, “burning with the fire of avarice, they [lawyers] make themselves the advocates of suits; and since they have to neglect the psalmody and hymns, placing their trust in the power of fine rhetoric instead, they confuse what is right and what is wrong, justice and iniquity, by reason of the variety of their arguments”. But, like their banking counterparts, purgatory had given lawyers an opportunity to avoid this stigma.

In fact, there were significant developments in legal practice that were favourable to lawyers. As can be seen in the tale of The Devil’s Lawsuit, in this period issues were considered in detail on a case-by-case basis, with judges evolving principles and encouraging highly rhetorical and complex debate. This opened up space for legal expertise to become a valuable skill that could grow with the development of new commercial demands.

So, as lawyers today teem over their financial results, perhaps they should spare a thought — a prayer even — for the Satanic lawyer and the creation of purgatory.

Sign up to the Legal Cheek Newsletter
Money past-present Solicitors