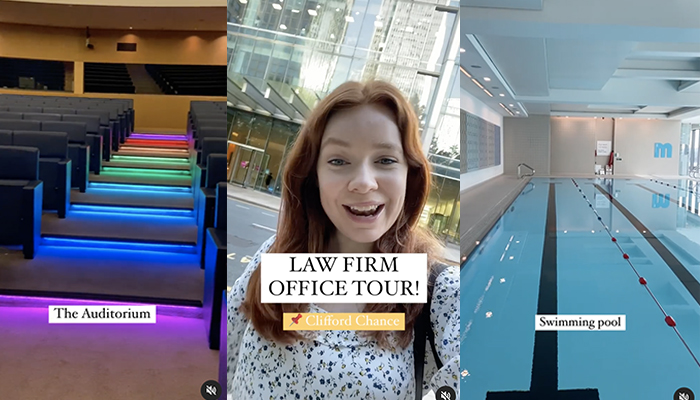 A legal blogger has shared a sneak peek inside a magic circle law firm’s perk-filled office.

Using Instagram’s fun Reels feature, Lucy Cole, aka @lucydoeslaw, shares in a short video montage some of the many perks on offer at Clifford Chance‘s swanky office in London’s Canary Wharf.

Cole, who is a future trainee solicitor at the firm, gives fans a whistle-stop tour of the magic circle firm’s headquarters, stopping by the much-raved about swimming pool with views high above central London.

Also featured in the clip is the firm’s humongous auditorium, which is lit up in rainbow colours and has seats apparently crafted from the same Italian leather used by luxury sports-car manufacturers Ferrari.

The canteen and coffee shop make a brief appearance, as do squash courts and even a spin studio! “Look how amazing these lights are!” says Cole, who wears a face mask covering whilst on the tour.

She then stops by the on-site gym and hair salon, before heading to the ‘Budgie’ bar, which has long been rumoured to be a subtle reference to the firm’s Canary Wharf location.

Several of Cole’s 10k-plus Instagram following reacted in awe of the footage. “I would just live there,” wrote one commenter, but others cautioned “stunning” offices like these are “designed to keep you in the office”.

Some years ago before Covid forced law firms to shutter their offices and instruct lawyers to work from home, Eve Cornwell, the legal YouTube star and Linklaters trainee solicitor with a huge online following, gave fans an “unfiltered” tour of the magic circle firm’s London headquarters. An in-house gym, coffee on tap, a pick-and-mix counter and a spot for piano recitals were just some of the perks she uncovered in the video clip.