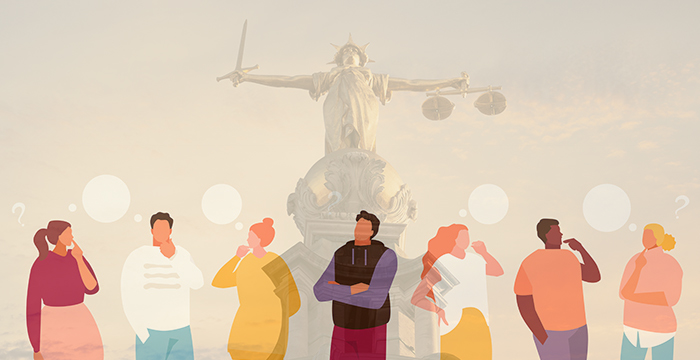 This is the second instalment in a special two-part feature examining the future of recruitment in criminal practice. You can read part one here.

It may sound like a bunch of comic book superheroes, but nobody on the Justice Committee wears a cape.

The MPs on the committee do important work all the same. A recent report on “The Future of Legal Aid” concluded that, without reform accompanied by more cash, British justice risks becoming a bad joke.

Among the specific warnings were that many criminal legal aid firms “are not able to recruit or retain lawyers, with a significant number leaving to join the Crown Prosecution Service”. Evidence before the committee included the Birmingham Law Society highlighting “significant concerns about the lack of new entrants to criminal practice, for both solicitors and barristers”.

The Criminal Bar Association (CBA) says there’s already a shortage of defence barristers. Its chair, James Mulholland QC, recently compared the group to the ancient prophet Cassandra, doomed never to be believed. “Concerns first expressed seven years ago and monthly since 2018”, Mulholland wrote, “have finally come to pass these past few weeks”.

Another of the Cassandras, solicitor Bill Waddington, reckons “we are now seeing the system collapsing. Something as big as the criminal justice system doesn’t just collapse in 24 hours — it takes a period of time — but it is now completely dysfunctional”.

None of this is news, of course, and the reasons for it (primarily financial) are well known. But as we explored in the first instalment of this article earlier in the week, there are increasing suggestions that law students can see this dysfunctionality for themselves, and are starting to veer well clear of criminal practice — even if it’s been their heart’s desire for years.

To gauge this sentiment, Legal Cheek spoke to a dozen law students and recent graduates with an interest in criminal law.

It’s fair to say that everyone we spoke to is approaching a criminal career with their eyes open. Several mentioned the Secret Barrister’s book, Stories of the Law and How It’s Broken, which doesn’t exactly promise an easy ride.

“I have definitely thought twice (countless times) about going into criminal law when it is so obviously in disarray, especially following the Secret Barrister’s book and the news article about how one legal aid barrister was earning less than minimum wage”, admits Leeds Beckett student Clark. He doesn’t know many fellow students planning to specialise in crime, and does know people who have been put off by the horror stories.

Clark himself, though, won’t be diverted from his planned course of legal aid barristering: “It hasn’t put me off even though I am well aware of how atrocious the situation is”.

Other students gave us variations on that theme: we know what we’re getting ourselves in for. Jasmine, a second-year at Queen’s University Belfast, is among them. She told us:

“I do find it deeply concerning, and it has prompted me to begin to consider other career paths besides criminal law. It’s upsetting, because on the one hand my passion lays within the criminal law sector, but on the other hand I have to think realistically about job prospects — can I afford to risk poor pay, especially when I will be having to pay back student loans and other living expenses?”

But even though she’s considering her options, Jasmine’s “primary goal” is still the criminal bar. “The pay may not be great, but people will always need someone to represent them”, she says.

Others have decided, with regret, that it’s just not feasible. A London-based pupil barrister tells us of getting two pupillage offers, one criminal and one civil. Despite “a real interest in pursuing a career at the criminal bar”, he ultimately went civil.

“What made the decision for me to opt for the civil pupillage was the massive disparity in the relevant pupillage awards; the news about the CJS being throttled by continual cuts; and work-life balance, which is difficult anywhere at the bar, but the reports from my friends in criminal practice were that it was pretty impossible there”, he tells us.

The 30-year-old added that “while I think I would have been happy to slum it in my early 20s I really didn’t want to do that now given I’ve started to think about settling down with my girlfriend and potentially start a family”.

Second-year law student Barney agrees. “I really want to have a family and it just seems like I would be missing most of my children’s lives”, he says. Despite wanting to be a criminal lawyer all through school, “I’ve decided completely against it and wouldn’t consider it now”. Among other things, the more he learned the less realistic it seemed, explaining:

“The pay and general conditions started to really seem like insurmountable downsides. I wouldn’t ever say I’d be motivated by high pay to do a job — I don’t want to be a solicitor or work in a big firm and earn massive amounts like some of my coursemates do — but hearing about how much legal aid would actually pay in many cases really made me worried.”

Criminal lawyers themselves often advise against. “I did work experience with a barrister who is now a Crown Court judge”, Barney remembers. “He told me that crime was good for learning advocacy, but that you should train away from crime within ten years and do something more lucrative”.

Jack, a recent Strathclyde grad, has plumped for the stability on offer in prosecution rather than defence. He’s accepted a traineeship with the Scottish prosecution service, saying that people are “thinking twice about entering criminal defence” given the financial downsides. “I think the benefits and career is more appealing package wise as a prosecution lawyer rather than defence”, Jack adds.

As this suggests, there’s no inherent lack of interest in criminal law. Katy, a second-year at the University of Sussex, says “it’s a shame because the majority of my friends who also study law say that criminal law is one of if not their favourite topic, so it leads me to believe that it has more to do with earning potential as opposed to personal interest”.

In fairness, it’s not all or nothing. Durham LLB student Laura, an aspiring barrister, told us “my intention to work around this issue of limited financial rewards due to legal aid fees is to diversify my practice areas and hope to build a mixed practice with the addition of family law or civil law combined with criminal work”.

Another budding barrister who’s starting the Bar Practice Course in September told Legal Cheek: “Many I’ve spoken to have talked about mixed practice. I myself would like to combine criminal with family law as a result of the instability in criminal law practice”.

The fact that most of our admittedly unscientific sample were interested in becoming barristers rather than solicitors chimes with Rebecca Wood’s experience. At her small outfit in Devon, currently struggling for training contract applicants, “students will come to me for work experience and generally if they have any interest in crime will go to the bar — that’s what their ambition is”.

For Wood, inability to recruit would be an existential threat to her firm’s criminal department. “If there isn’t a trainee or new blood coming in, crime just won’t survive the next decade in our firm”, she says. “It’s make or break”.

Many in her position are pinning their hopes on the Independent Review of Criminal Legal Aid, rumoured to be reporting next month. Waddington says firms could respond quickly if given a big increase in legal aid funding. “I do think that the recruitment problem would be eased if firms were in a financial position to be able to offer better salaries and conditions”, the veteran says — although he’s less confident that the government would act on any such recommendation.

No matter what Lionel Hutz might think, a dearth of criminal lawyers is bad news for the whole of society. For Rebecca Wood, though, it’s a personal tragedy as well.

“This is what I’ve always wanted to do”, she tell us. “I’d like to live out my days as a criminal lawyer. I desperately don’t want to write wills, that’s all.”

This is the second instalment in a special two-part feature examining the future of recruitment in criminal practice. You can read part one here.