Big law firms are lagging ever further behind when it comes to diversity at the top, the Solicitors Regulation Authority has found.

The SRA’s latest diversity survey shows that 8% of partners at the largest firms in England and Wales are Black, Asian or from another ethnic minority, compared to 23% at small firms and 35% of single-partner outfits.

While both the largest and smallest firms recorded an increase in BAME partners compared to 2019, the rise was much greater for the latter — meaning that the diversity gap increased.

The SRA defines “largest firms” as having 50+ partners and found that just 4% are Asian and 1% Black.

Among solicitors as a whole, Asian and mixed-race people are statistically over-represented compared to their share of the working-age population, while Black and “other” ethnicities are under-represented. 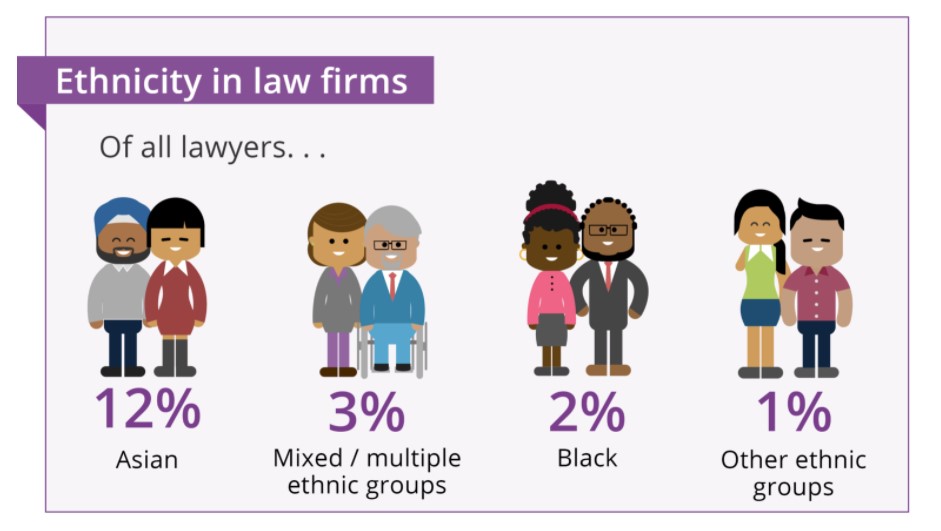 Megafirms also look a bit suspect on other measures of diversity. Over half the solicitors at outfits with 50+ partners are female, but less than one third of partners.

The SRA also says that the largest law firms have “a smaller proportion of disabled lawyers” and “the greatest proportion of lawyers from a professional socio-economic background, and those who went to independent/fee-paying schools”.

“Diversity for Black, Asian and minority ethnic solicitors and women at senior levels is a particular challenge at large firms. We know that many firms have excellent initiatives in place to address progression and retention, but there is clearly more to be done.”

The regulator collected over 180,000 survey responses from almost 9,000 firms in England and Wales.

Its findings follow hard on the heels of an equivalent report for barristers showing that diversity at the bar continues to creep up slowly.

I think overall firms are doing good on recruitment for women and BAME associates that isnt the biggest issue, retention is.

This is really the issue. It is telling that, to date, only A&O has published the retention gap between minorities.

My trainee intake at the start was quite diverse. Then the BAME numbers were disproportionately culled at qualification (including trainees who, as far as I am aware, were very good at the work). Then you notice all your BAME colleagues seem to be disappearing before 4PQE.

This can only be confirmed by the firms who hold the data, but their silence speaks louder than words given they all signed a commitment to monitor statistics “with a view to publishing” them.

Looks like they are all waiting for the day when the statistics flatter them.

This is hardly surprising. Good old colonial abs imperial views of the Great British Empire still persist in this area.

So many pompous partners with their virtue signalling to cash grab prospective clients.

Women are over-represented at solicitor level, so that lack of diversity needs to be addressed too, otherwise the diversity survey lacks diversity.

There needs to be an open and honest discussion about why women are choosing to leave before being made partner (the reason that there are less female partners isn’t because men are being chosen ahead of women) and whether this is something which could or should be addressed.

Until the senior members of the legal profession are more diverse it’s going to be quite hard to break the glass ceiling but I’m hopeful it will. Something has got to give.

Something to do with having children perhaps in the vast majority of cases… and the fact that working at the top of any profession can be a lonely place because of long hours.

As a young woman I’m sick of companies FORCING diversity among the genders. I’ve seen plenty of competent, hard working female partners in the city. The reasons why there are less women at the top is a complex issue, and likely only due to outdated views/sexism in a minute amount of instances. Having a victim mindset helps no one

People with potential and competence are not given a chance.

It has been like this for centuries, it will continue to be like this till AI and general automation basically makes the profession negligible.