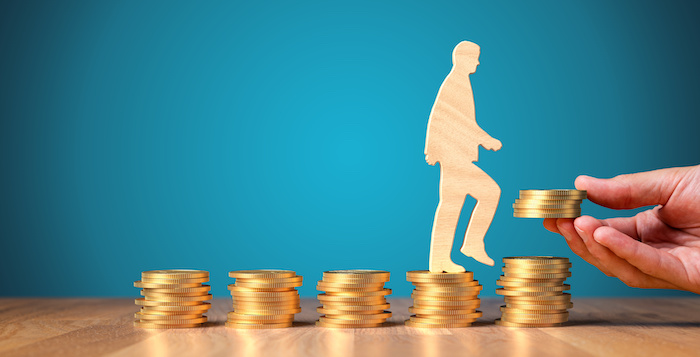 The recent spate of newly qualified (NQ) solicitor pay rises has given rise to so-called “salary bunching” at some UK law firms, whereby the difference in remuneration is rather negligible further up the associate ranks.

This was the key takeaway from an open thread we shared last month in an attempt to shed light on lawyer salaries beyond trainee and NQ level.

Sourcing this information is not easy (we’ve tried) and quickly goes out of date, so we passed the baton to our readers, many of whom work for UK law firms, to share their insider knowledge.

One UK-headquartered firm is said to be paying £95,000 at NQ level, £96,000 at 1PQE (post-qualified experience), £98,000 at 2PQE and £101,000 at 3PQE. “That bunching is abysmal”, wrote one anonymous commenter, with another saying it was the reason why they made a lateral move to a US firm, where the financial rewards are significantly higher and the hours, more or less the same.

“It’s so obviously all about the flashy NQ salaries to get people in the door,” said one Legal Cheek reader. “After that, who cares?”

Our readers do, clearly. The thread drew in over 250 comments and counting, and makes for insightful reading.

Our commenters have provided the lowdown on several other firms, including the magic and silver circle and those in the regions, but note that these figures are as of yet unverified.

• Associate pay can vary according to practice area, with those in busy transactional teams such as corporate or finance widely accepted to be at the higher end of salary bands but also, target hours.

• The salaries at some firms can be fixed for associates of about one to three years PQE, after which there’s banding and pay is determined based on performance, but this is by no means a hard and fast rule.

• Lateral hires being paid lower than home-grown talent and in one instance, a 3PQE lateral paid the same as a 1PQE associate.

• The varying bonus schemes in place at UK firms.

So where do we go from here? Perhaps we’ll see a UK law firm go on the record with a full breakdown of what they pay associates from NQ to at least 3PQE, leading the way for other firms to disclose their figures. But don’t hold your breath.

Please can someone send this and the original thread to Kate Beioley (legal correspondent) at the FT? An article in the FT always seems to get partners’ attention

Legal Cheek, you literally do meaningless surveys on arrival and leave times for associates at different firms and pass that off as gospel truth and now you’re unwilling to do more than a vague article (without even naming any law firms) on salary bunching. Useless!

DLA is the way

I do not envisage a UK law firm publishing it’s banding. More and more firms are salary bunching, squeezing associates from the 1-5 year PQE. Totally unfair and a well-known tactic. Associates are clued on to this. Credit to DLA for acting like a class outfit.

Why are DLA a class outfit in terms of banding? Genuine question. Only saw regional salaries on the other thread.

Because at least they have the decency to offer a competitive salary, unlike the rest of the regional outfits.

Salary bunching in London is very real at DLA

I can’t even begin to comprehend this logic??

I’m very interested to find out more about Silver circle rates post NQ. It seems they used to bleed associates a lot less than the MC. Is it quite a decent package then?

My Acai Bowl Spilt All Over My White Shirt

You should have some kind of surveymonkey or other anonymous or verified poll where people can write in with dated salaried like a version of glassdoor, including US firms which may not follow peer firms / Cravath pay rises.

What is going on with CC, A&O and Linklaters? Into May and no word on raising NQ or associate pay.

Could be waiting to see what the rest of the market does in the meantime!

CC is doing its salary review as it always does, backdated to May. So we will see soon. Rumour is a 120k NQ.

lol, CC better do better otherwise, I am ending up at FF.

Really? Your decision would be made over a couple hundred pounds net in your account a month (not to be sneezed at, just curious)? What else are you basing this on?

My guess is they’d already decided a number then FBD threw a massive spanner in the works and they’re having to look again. I’d already heard rumours of fairly chunky raises though.

Why would you not name the firms? Pointless half-assed article when you could actually have published something of value

Because one of the interesting things, my interesting thing is very specific and I asked in my email for that to remain confidential. You could probably round up the specific people who that circumstance applies to and find out who it is.

Believe it when I see it. Imagine squires matching DLA and ahead of AG, ES and PM

Ahead of CMS too. Complicates things further as they have historically paid less.

My choice of sauce with a steak is garlic butter. Many people favour peppercorn sauce but I find it overpowers the steak.

Another regional rumour is that Shooeys are increasing salaries. No word on the amount though.

I know Shooeys does a summer pay review so this is a good bet.

An increase at Squires also seems likely but climbing in the ring with DLA at £65k NQ would be a big move. Then again everyone I know there has punishingly long hours by regional standards.

Are you not ordering the peppercorn sauce on the side to dip your chips in?

While on the subject of sauces - the only liquid that should be on a roast is gravy. Mint sauce / horseradish on a roast is an abomination.

I see Squires hitting 60-62k (currently paying 55k I believe). I think they increased to 55k before DLA’s power move to 65k which kicked off the regional pay war and so might still be yet to respond.

I see Shooeys increasing to 55 – 58k (currently paying 50k). I think 55k is most likely, after all they’re not on the level for the 60k+ firms (ES, DLA, AG). If they were to hit 60k that would definitely transcend them from the Mills and Reeve / Gateley crowd.

I dip the chips in the garlic butter and the steak juice.

SPB did confirm yesterday that they are committing to increasing NQ pay to “at least” £65k in the regions and £100k in London.

They confirmed that it will be higher than that if the market at the time demands.

It seems that exactly what was feared by many colleagues in the other article has happened. LC clearly tip-toeing so they don’t lose their sponsorships while not adding anything further meaningful to the discussion. Many people were hoping that the initial article was the start that was needed to gather momentum and spark change but looks like it’ll stop here.

LC – it is evident from the number of comments that people are willing to collaborate. Make this happen and junior lawyers will flog to your website and you will be gaining a lot of respect from people who will go on to become senior lawyers in the city.

So six years after graduating, this sols are just making £106k? That must be depressing, especially with the 62% income tax rate coming in the following years too to gobble up most of any other raises.

We need more on US pay for firms depending on exchange rate so they can’t hide behind the veil of purportedly paying Cravath. For example, Latham pays NQs “215k USD” but that’s converted at 1.45 (especially bad exchange rate they’ve chosen to fix) = 148k GBP. Kirkland does spot exchange so as of today annualised it’s 173k GBP. Firms like Latham need to get a move on.