A judgment published earlier this summer is understood to be the first instance of a judge using a meme in a ruling.

Florida judge Mark Walker used the famous ‘Spider-Man finger-pointing’ meme to describe the two defendant’s inability to agree on who was responsible for the delays in making civil complaints in Broward County Circuit Court publicly available.

Explaining the behaviour of “Defendant Rushing” and “Defendant Forman” he wrote: “Given the “unique” structure of Florida’s e-filing system […] (“Portal staff is unaware of any other state that uses an entity such as the Authority to operate an e-filing portal.”), it comes as no surprise to this Court that the Defendants’ litigation tactic is to point fingers, as illustrated below.”

Walker then includes the famous meme with the description “Fig. 1. Clerk Forman and Chair Rushing”. 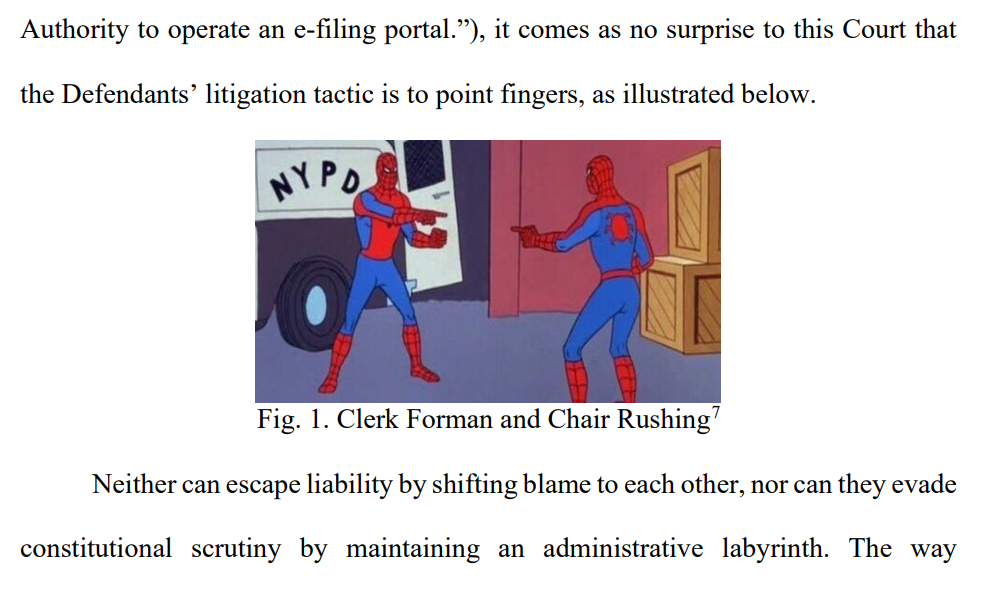 He also includes a footnote citing Screen Rant journalist Charles Nicholas Raymond’s explanation of the meme: “As one pop-culture commentator explains, ‘[t]he image of the two pointing Spider-Men has been captioned—and sometimes recreated—in all sorts of different ways. It’s been around since at least 2011. It’s been used by fans, celebrities and even politicians to make funny comparisons between people that either seem oddly similar or are engaged in the same activity.’”.

Commenting on the seemingly novel use of the meme, associate dean for research and professor of law at Santa Clara University School of Law Eric Goldman wrote in his blog: “It should be clear to all parties that, by using a meme to emphasize the point, the judge has no f**ks left to give.”

This not the first time the meme, which comes from the 1967 Spider-Man cartoon where a villain attempts to impersonate Spider-Man, has been referenced before in official public matters with ex-No 10 senior advisor Dominic Cummings referencing it to explain the lack of accountability among politicians and civil servants working in Westminster.

Professor Goldman goes on to consider whether it is a wise move for judges to be using memes: “On the one hand, it expands the toolkit for judges to make their point, and sometimes a meme is worth a thousand words. On the other hand, memes often are fully understood only in limited cultural contexts, and meme often develop unwanted and unintended slang meanings.”

Given the reaction of lawyer and former Justice Secretary David Gauke’s reaction to Cummings’ reference, perhaps such developments would only lead to confusion. Gauke, who now works for Macfarlanes, tweeted at the time of Cummings’ evidence: “What? It’s SpiderMan’s fault!”

Sign up to the Legal Cheek Newsletter
Judgments Memes US