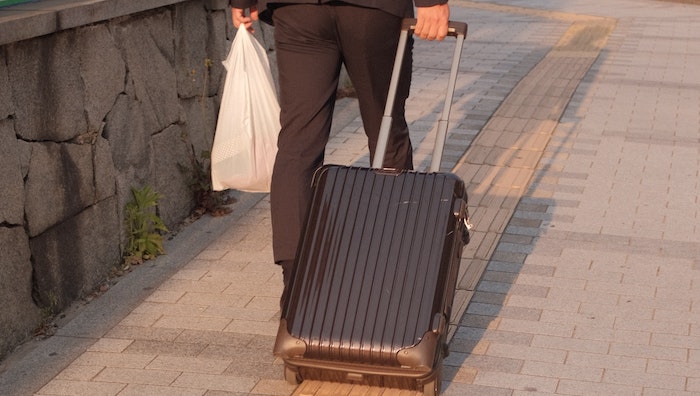 An experienced family law barrister has taken to social media to reflect on how life at the bar has changed since he qualified nearly 30 years ago.

In a Twitter thread over the weekend titled ‘Some things that have changed since I became a barrister’, 1GC Family Law’s Julien Foster explained how the legal profession’s push to go paperless means he no longer has to “hump heavy wheelie bags” around the country.

This lighter load does, however, have its drawbacks. “I can carry numerous pages of medical disclosure on a device smaller than my telephone,” the barrister explains. “Many of the medical notes remain illegible and I have to rotate many clockwise, then anti-clockwise twice, then back.”

Another change noted by Foster is the use of the eye-catching pink ribbon often seen wrapped around barristers’ briefs.

I neither get briefs tied with pink ribbon nor teach pupils (as I was taught) the cardinal importance of tying up one set of papers before opening another. Instead I get numerous emails, some embedded like Russian dolls. Or a portal requiring the skills of Indiana Jones to open.

And using an opponent’s first name.

Other tweaks noted by Foster is checking something on your mobile phone in court (if relevant to the case, of course!), using Google to look something up and emailing documents directly to the judge rather than pleading with ushers to make photocopies.

Some lawyers even chipped in with their changes, with one noting they “saw a barrister wearing trainers”. God forbid!

My father is a STEM university professor.

25 years ago, he’d very rarely see a woman or someone from an ethnic minority in his lecture hall. Today, he says the best part of his job is the fact his students come from all backgrounds.

It’s a shame that the changes this barrister praised the most seem to be material ones that affect his personal comfort.

God, some people are dull and self-righteous.

That’s exactly what I thought when I read the tweets.

DWF are the best

Indeed. However, this is about “how the working functions of a barrister has changed”. This doesn’t necessarily include diversity; that’s how the profession has changed in terms of workforce.

From the lack of fax machines to email – EVERY profession has changed in 30 years. Not just the Bar.

It’s one of the only ones though that consistently fails to get women and ethnic minorities into positions of authority.

These self-pitying moaners really do need to grow up and take some responsibility for their own lives. Bleeding’ broken records.

I wish members of the Criminal Bar would do this too

Really? Lady Hale, Lady Arden, Lady Black, Lady Rose, Lady Justice Butler-Sloss, Mrs Justice Dobbs, Lord Justice Singh. Off the top of my head. Think the first woman Prime Minister was also at the bar. Much work to do; it’s far too slow; but those are at least some of the names of those who have risen.

The next test for the judiciary is whether Lord Justice Singh will be appointed to the UK Supreme Court. By all and any objective metrics, he should be. He is a formidable jurist.

But the politics of the process may tell a different story. As we know, judicial appointments have traditionally been very chummy, opaque and hostile to those from the ‘wrong’ backgrounds.

If Singh doesn’t get the pick, then it proves once and for all that the UK judiciary has no interest in meritocracy. Watch this space…

When is your Christmas self-pity party?

You should feel sorry for me.

Time and a place?

Wow. I thought this thread would be filled with either nostalgia or anecdotes about how things had improved since the red string and fax machines went.

Instead it has turned into a moan that he didn’t make it all about diversity!