A broken bridge to equality 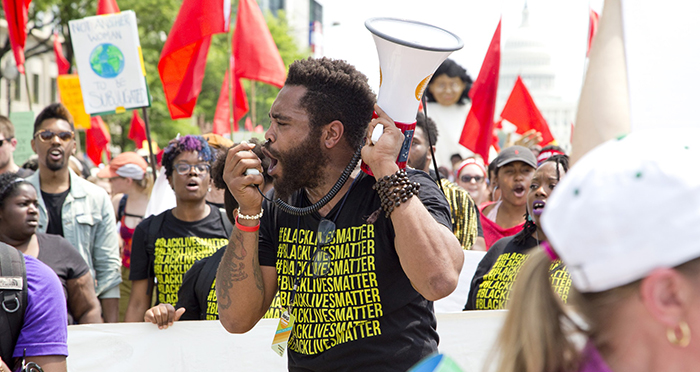 As Barack Obama stepped up on the podium to rejoice his presidency, one young woman exclaimed: “At this point, the whole race thing is over… it doesn’t matter anymore. We’ve transcended it. Now we have a black president, so clearly we are not racist.” Eight years later, as Obama left his presidency in 2017, you could only wish this was true.

Since 2015 and at the time of writing, there have been 738 black deaths reported through police killings in the United States. Though they were all different — male, female, young, elderly, queer, trans, and differently-abled — their similarity is what ultimately killed them: their colour.

This article is not to define what complex action must be taken; with every black victim of police brutality, there arises a greater surge of visions of reform. Instead, I argue that ambitious attempts under the name of Black Lives Matter will not change the criminal justice system, because the US was not built to make black lives matter. The 738 black murders cannot have the impact to drive a legal change in a country which does not protect, preserve or uphold black life. There is no justice, no repercussions and no driving force to realise the definition of equality the US constitution falsely prides itself on maintaining. What’s required is a systematic reform of a fundamentally broken system.

On the surface, accountability should be a key factor in changing black treatment. Yet, this can only materialise if the criminal justice system of the nation allows it to (which it does not).

This disregard has come in several forms. In 2016 a bill was drafted in Texas requiring education for all ninth-grade pupils on the ‘proper behaviour’ of civilians when interacting with police officers. It is understood that education is important, but only when given to those who require it. Similar disregard came in the form of Blue Lives Matter, a countermovement to uphold the protection of police officers in response to the Black Lives Matter movement — this campaign is now law in two states.

These attempts are simply creating a new class of people who will be taught not to question authority when they need to be questioned, not to challenge rules when they should be challenged and allowing state power to devalue black communities further.

The irony in these ‘reforms’ is stupendous. The police force is a collective identity which already holds a high privilege and insulation from the forms of violence experienced by the black community. Thus instead, we should be educating those in law enforcement who are under direct responsibility to protect lives but are currently greatly abusing their powers. Therefore, Blue Lives Matter is merely an unwarranted act of white supremacy implying itself as a targeted race: a true paradox to the American reality.

The real paradox here is that we assume we are fixing a broken system, yet it was never right from the moment of its inception in 1776.

The criminal justice system was created in such a way that segmented the beliefs and values of people/communities at the time. Such a structure was designed to feed into the supremacist agenda acting to dismiss the history of race relations and this marked the beginning of the white washing of history. This system is a reflection of the society that empowers it: a white society that has denigrated black people since the Antebellum period. This is a nation in which the same constitution once considered African Americans only three fifths of a person. Thus it comes with little surprise that, the application of laws and distribution of criminal penalties will undoubtedly be disparate and fuel the ideology of white supremacy and black inferiority until today.

It is here that the necessity of such a monumental vision like that of the Black Lives Matter movement comes into play.

It acknowledges that history and the law has only taught that the American system was structured to disrespect black humanity and dignity. This movement is a fight to end mass incarceration and afford its people the chance to drive forward their liberation.

They tried to bury us. They didn't know we were seeds. #BlackLivesMatter pic.twitter.com/HtTLje3k2u

Nonetheless, this empowerment cannot be achieved in a nation which has always organised itself to suppress this community. Why do we think there has not been any justice for the likes of those 738 black individuals shot, stabbed or choked to death by a police officer? Because the legal system does not function for a white man to face the consequences of his actions. Where the legal system does not operate under the name of justice then how can we expect any branch of law based from this to be morally right?

With regret, we face a reality where despite social change, the historic legal flaws in US society remain engrained. The historical derogation of black people was birthed from the racialised ideologies of the Ccolonial period, which continue to manifest itself in the justice system. If there was going to be change, it would have taken place instantly when 12-year-old Tamir Rice was shot for playing with a toy gun, or when father-of-six Eric Garner was choked to death.

The 738 cases of black killings and only 46 police offenders being charged speaks for itself. It affirms the notion that the system is not broken; but operating in a way it was designed to function, which is to suppress, subdue and socially control black people. It is unfortunate to say but currently there only stands a papier-mâché bridge to equality, which will bleakly stand until a systematic change occurs in this backward constitution.

Yet, with hope in a future for the dreamers, and words in our heart for the voiceless, we can continue to fight for a nation which comes to respect black human dignity, values black communities and makes Black Lives Matter.

Eeman Talha is a third-year law student at Aberdeen University.