Our driving laws are not geared up for the possibilities of driverless vehicles, but could the Law Commission have found a way to steer through the obstacles? MSc student and qualified Turkish lawyer, Öznur Uğuz looks at proposals for reform 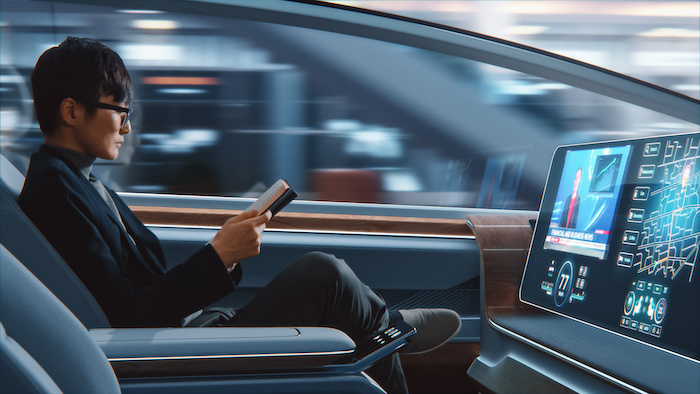 The Law Commission of England and Wales, which advises the government on law reform, published an issues paper on the law surrounding remote driving, Remote driving, in June 2022. It examines the existing law regarding remote driving and possible reforms, sets out and briefly analyses legal issues arising from the current law, and poses questions in order to invite responses from the public.

Remote driving — a technology that enables a person to drive a vehicle from a remote location rather than from within the vehicle — is a hot topic currently attracting a lot of interest from industry and business. It is already being used in the UK in off-road environments, particularly in farming, and is increasingly being trialled for on-road use. Its attractions include the ability to operate in hazardous environments, such as a mine, quarry or warehouse, and provide more feasible delivery. There are many challenges, however, particularly in terms of safety, liability and compliance.

How safe is it?

From a legal aspect, arguably the most important safety risks posed by remote driving are related to cybersecurity and terrorism. Some serious concerns on the matter include possible takeovers of remotely operated vehicles by hackers as well as their use as “a terrorist weapon”. Other risks referred to in the Law Commission paper relate to connectivity, situational awareness and maintenance of the driver’s focus.

At present, there is no specific legal and regulatory framework for remote driving, which requires existing laws and regulations to apply to remote driving systems and their operation. However, the adequacy of existing rules when applied to emerging technologies is highly questionable as these rules were formulated when the current level of technology and its possible implications could not be imagined.

Regulation 104 requires a driver to have proper control of the vehicle and a full view of the road and traffic ahead. The paper points out that Regulation 104 does not necessarily require the driver to be in the vehicle. This suggests that as long as the driver has a full view of the road and traffic, whether through the use of connectivity, the full view requirement can be met. As emphasised by the Commission, the more difficult issue with the provision is what amounts to proper control as it is unclear whether proper control refers to the type of control a conventional driver would have or can the requirement be satisfied also by a person undertaking only part of the driving task.

Regulation 107 prohibits leaving a vehicle unattended unless the engine is stopped and the parking brake set. The Commission seems to have found the regulation mostly compatible with remote driving in light of the case law, according to which the driver does not need to be in the vehicle as long as they are in a position to observe it. This suggests that a vehicle may still be “attended” by a person who is near the vehicle or in a remote-control centre. However, the provision may still be breached when a remote driver cannot see the vehicle or is not in a position to prevent interference with it.

Regulation 109 prohibits a driver from being in a position to see a screen displaying non-driving related information. The Commission has found the information regarding the driving environment and the vehicle such as route and vehicle speed, which is displayed to a beyond line-of-sight driver through a screen, driving-related and thus permitted under regulation. Still, they have noted that information that developers might wish to display may go well beyond what is permitted.

Regulation 110 forbids the use of hand-held devices whilst driving, including mobile phones. In the Paper, Regulation 110 has been found “potentially problematic” for “line-of-sight” driving, where a person walks alongside a vehicle and controls its speed or direction through a hand-held device. Such a person would technically be a driver who is using a hand-held device whilst driving, which would be a breach of the regulation even though the original aim of the regulation was to prevent the distractory use of mobile phones while driving.

Problems with the current law

The Commission is concerned that these uncertainties with the current law might hinder the development of some potentially valuable projects or could be exploited to put on the road systems which are not ready in terms of quality and safety. Accountability for poor remote driving is also an issue as the main responsibility currently lies with the driver, which may result in injustice, particularly where the driver has little control over the key aspects of the operation. Such that, a remote driver could face criminal prosecution for a serious offence in the event of an accident, even if they were not at fault.

Civil liability may also become an issue in the remote driving context. As a possible example, it might be difficult to determine the person liable for damage in the event of an accident if the problem lies in connectivity or some other latent defect rather than with the driver. While already difficult to determine how and who caused the harm, it might even be more complex when it comes to new technologies involving multiple actors and internal components.

In terms of insurance, the Commission refers to the UK’s compulsory motor insurance scheme. As originally required by the Road Traffic Act 1930, third-party motor insurance is compulsory for anyone who uses a motor vehicle on the road. While for a conventional vehicle identifying the person who is using the vehicle is quite easy, the situation is complex in the remote driving context. The paper refers to the case law and states that in that case, both the driver and the organisation that employs them would be “using” the vehicle, meaning they would both need to be insured against potential liability.

In the event of damage, the organisations that employ the remote driver would be liable for both; their own wrongdoing in operating an unsafe system, and the faults of the drivers they employ. In addition, employers would be responsible for any defect in the vehicle or in the remote driving system. Still, a situation might be much more complicated than that, especially where a remote driving feature of a vehicle has been designed by one organisation but operated by another, or where a remote driver is a subcontractor rather than an employee.

One of the most interesting issues in terms of remote driving is the legal implications that might stem from the operation of a remotely driven vehicle on UK roads from abroad. There is currently no international standard on the regulation of remote driving, which might lead to serious challenges in the event of damage, particularly in terms of compliance with driving regulations and law enforcement. In addition to possible delays and high expenses, tracking down evidence of an accident which has occurred abroad but involved a vehicle operated remotely from the UK would be practically difficult.

Another important concern in the international context is whether a remote driver from another jurisdiction who is driving a vehicle on UK roads would need a UK driving licence. As explained in the paper, as a contracting party to the Vienna Convention on Road Traffic Act 1968, the UK is normally obliged to recognise a driving licence issued by another country that is a contracting party to the Convention until the driver becomes normally resident in the UK. Still, as remote driving involves higher safety risks than conventional driving, this existing provision might not be directly applicable in the remote driving context and an amendment or reform might be needed.

Concerns and possible implications of remote driving technology are much wider than these and require a lot of time and thinking from experts to be managed. However, the paper makes it clear that the current law needs at least amendments to provide clear rules to follow when dealing with remote driving technology so that efficient solutions could be produced to any problems the technology might pose. Regarding any future legal reform, the Law Commission is expected to set out possible options and publish advice to the UK government early in 2023, after receiving responses to its paper.