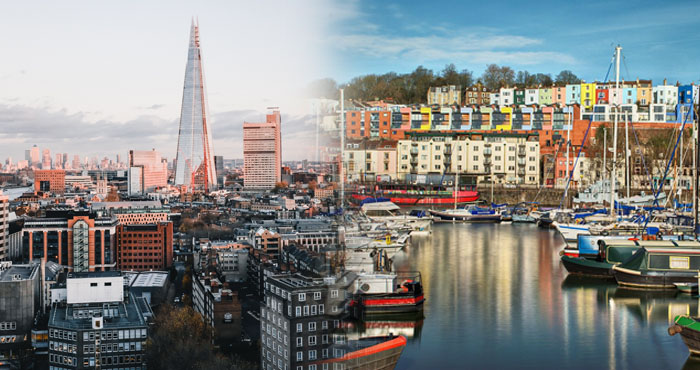 Famously, London was once described as “a splendid place to live in for those who can get out of it”. Now, with average one-bed rent a whopping £1,250 a month and the average London house deposit setting you back £100,000, the feat is as much getting into the City as it is getting out.

But fear not, trainees and junior lawyers — law is among the highest-paying professions in the country. A third of lawyers earn £100,000 and some firms even pay more than this on qualification. If you stick around long enough, partners in the City earn into the millions, so it’s a safe bet for Big Smoke domination, right? Right?

Not according to one trainee, earning about £50,000 and set to make in excess of £70,000 on qualification. She begrudged on her Twitter account:

With even top-earning lawyers unable to get onto the London property ladder, and in total contrast from City Hall’s ‘London is Open’ campaign, the capital has erected a sort of ‘financial fence’ around its parameters. Or, in the words of journalist and author Caitlin Moran in a column aptly (and sort of apocalyptically) called ‘LONDON IS DYING’, “no one new is being let in, any more — unless, of course, they are oligarchs, or of the bonus class, who may helicopter over the gates, at will. No one I know can afford to move here… They are locked out.”

Following a death comes grief and mourning, but not for Moran, she says:

“It’s good news for Britain. A million ideas a week that would, previously, have migrated to London will now remain in their home towns, and make those towns glorious instead. As London, glassy-eyed and compulsive, begins to eat its own heart out, Manchester, Birmingham, Bristol, Glasgow, Sheffield, Liverpool, Cardiff and Plymouth will rise again.”

‘Rising’ too are these cities’ legal districts. There are major UK firm offices in the likes of Birmingham and Manchester, but note the sheer number of major corporate outfits inside Bristol’s borders, including: Burges Salmon, Osborne Clarke, CMS and TLT. Simmons & Simmons recently announced its Bristol expansion, while RPC just this week revealed it would be reinstating its Bristol training contract programme. Clyde & Co will be opening an office there soon, too.

The word ‘regional’ has strangely come to be used as an insult in the legal profession, yet the Bristol trainees we’ve spoken to had little but praise for the ‘City-quality work without the City-style hours hitch’ combo boasted by their firms. “Genuinely interesting work”, “independence earlier on in [your] career” and “a far better work-life balance” are all trumpeted by one regional trainee. Another adds:

“I had already worked for three years in London prior to getting my training contract in Bristol. Most of my friends trained at City firms and I also had an offer from one; I made the choice based on my own happiness, geography and the firm. I like the sea, surfing and cities, and in Bristol I can combine the three. It is a very easy going and cool place to live. London is cool, it is not easy going and I did not want to spend my twenties in an office. I don’t believe you become a better lawyer by staying later and I don’t believe you gain happiness or fulfilment from the inside of Liverpool Street Station.”

Perhaps it’s small wonder Burges Salmon won Legal Cheek‘s Firm of the Year gong in 2017 and is up for the prize again this year (alongside Osborne Clarke and RPC).

But, to some of you, all these perks are nothing on the absolutely mental salaries you can expect in London. As mentioned, some London firms pay in excess of £100,000 on qualification. In Bristol, a big corporate outfit will pay you half of that (if you’re lucky).

A basic comparison of the pay packets clearly crowns London the higher payer, but, to use a common phrase, it’s about quality, not quantity. A Bristol NQ’s approximate £50,000 a year salary, which is £3,065 per month after tax, will stretch far further. The maths, albeit very crude maths, bears it out.

In Bristol, one-bed rents will set you back an average of £818 in the city centre or £680 outside of it. It took me minutes to find a one-bed flat on Zoopla for £775 per month, this being a six-minute walk to the city’s main station, nine minutes to Burges Salmon, seven to Osborne Clarke or 15 to CMS (zero commuting costs). If you’re willing to travel a little further afield, here’s a one-bed flat for £475 that’s a 27-minute walk from the station, or another for £450 that’s a 35-minute walk from the station.

Sticking with our close-to-work Zoopla property above, a £50,000-earning NQ will be left with roughly £2,290 a month after rent. The average deposit needed to buy a house in the city is about £24,000. If you stowed all of your £2,290 away after rent (not realistic I know, but let’s keep the maths simple) you’d have a Bristol deposit saved in ten months. If you’re on £40,000 in Bristol — a city that recently won the ‘Coolest city in Europe’ award — that’s around £1,755 after rent. With that, it’d take you 14 months to save for an average Bristol deposit.

The London housing market, by comparison, is indefensibly expensive. One-beds range from £825 a month in Bexley to £1,950 in Kensington and Chelsea, with the average coming out at £1,250. (In Bristol, you could expect to snap up a two-bed riverside house or a detached four-bed for the same price.)

This means even an NQ on the highest wage in the City would be unable to save up for an average London deposit quicker than a Bristol NQ on £40,000 would be able to save up for an average Bristol deposit. Of course, none of these calculations have factored in: average commuting costs, bills and expenses, which will also be far higher in London. They also only look at one-bed flats (which aren’t very amenable to families) and average rents and deposits (I assume many of our readers would have their sights set higher).

The maths is stark but, of course, it cannot capture the multi-faceted reasons someone may want to train and work in London (in other words, God forbid, money isn’t everything).

“The idea of London as glamorous”, it offering “the most interesting and challenging work”, “job prospects in general” and “international secondment chances” are all mentioned by one soon-to-be lawyer in defence of the Big Smoke. And maybe, some people just kind of like it as a city. One trainee says:

“I think London is pretty cool; I’m a Tottenham Hotspur fan, love the theatre and a load of my best mates from uni are here now too. I’ve also been coming here since I was wee with my family…. I never really expected to be in a position to be in the house market until I was like 30 anyway, as it just seems a fact of life for our generation — house ownership was never a priority for me.”

Of course, a training contract and NQ role in London doesn’t mean a life led there, too.

“I don’t plan on staying in London forever. Quite frankly, I don’t even like it that much,” says one trainee I spoke to for this piece, “I decided to do my TC in the City largely for financial reasons. I’ve heard that if you train in London, you can be poached by regional firms for high salaries — higher than if you had trained in those firms. I think in ten years, maybe less, I’d like to move somewhere that can offer a better quality of life, even if that means taking a significant pay cut.”

On paper it’s a smart move but — as discussed in a recent Legal Cheek podcast, embedded below — a ‘work now, live later’ attitude to life can, unfortunately, sometimes prove misguided. (We have come full circle to my first line of this piece: that London is “a splendid place to live in for those who can get out of it”.)

That’s because it doesn’t work economically. Data shows there’s a strong positive correlation between earning more and needing more to get by, known as the ‘decreasing marginal utility of income’. “Once you’re half way up the ladder, it’s very difficult to come down,” the research concludes. Publisher Alex Aldridge, speaking in the above podcast, puts it in more real-world terms:

“What I’ve seen is that often people who have started on a certain path with the intention to do something later, ‘I’ll just get the money and then I’ll do something later’, it hasn’t worked out that way in the end. You get into your big, high-earning City job, and you get a big mortgage and then on top of that, perhaps the partner you’re with will have certain expectations and you get used to this certain lifestyle which is quite expensive and you’re reliant on your salary.”

London, throughout history, has been described as “a world within itself”, “a roost for every bird” and “a modern Babylon”. If you like it, you like it; this piece won’t change your mind on that. But if you find the City smoke choking and the skyscrapers give you vertigo, know that Bristol is calling. And with its happy trainees, high-quality work and per-pound value, maybe you should answer.

Sign up to the Legal Cheek Hub
Bristol Solicitors Students