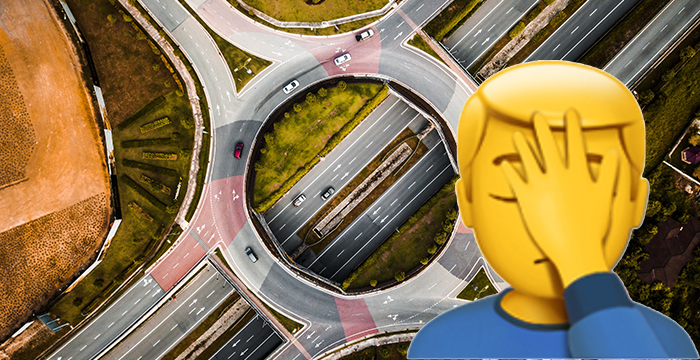 A law student has received his first taste of (unwanted) courtroom action after being found to have deliberately caused a road traffic accident in order to make a fraudulent claim.

The aspiring lawyer, who was travelling with three other friends, claimed he was struck from behind by another vehicle while stationary at the junction to a roundabout. However, the driver of the other vehicle, an employee of Specsavers (irony alert!), alleged that the car ahead had “stopped for no apparent reason when moving onto the roundabout”, according to a recent case summary published online.

It continues: “She applied her brakes and came to a complete stop just behind their vehicle, before her foot slipped off her clutch resulting in her vehicle moving slowly forwards and making contact with the rear.”

Despite this seemingly minor collision, the law student, along with one of his friends, issued a claim against Specsavers insurers, Catlin Insurance Company. The case summary, produced by Clyde & Co, the international law firm which represented the insurers, goes on to list a catalogue of issues that eventually led its lawyers to believe, and later the courts, that the accident was caused deliberately.

Spoiler alert: the law student, who Legal Cheek isn’t naming, does not come out of this well.

Firstly, the wannabe lawyer immediately presented his pre-written details to the other driver, before then leaving the “scene in a hurry” when they suggested calling the police.

According to the law student’s witness statement, “the defendant was very apologetic after the accident” and, as a result, felt there was “no reason to call the police”. However, amid concerns later that the accident may have been caused deliberately, he issued a further statement questioning her decision not to call the police in the first place. “He seemed to be pre-empting what he knew the defendant was going to say in respect of the police”, according to the summary.

It also reveals that both the law student and his unnamed friend were involved in a separate accident in 2015. On that occasion, insurers repudiated the claims over concerns that this accident was also induced.

Things went from bad to worse for the law student when his latest claim went to trial last month at Manchester County Court.

Under cross-examination, he claimed to have no knowledge of the 2015 accident and could offer no explanation as to why his name had appeared on the original claim. This despite details of the previous incident appearing on the medical report from this latest accident.

Making matters worse, both claimants “were very inconsistent during cross-examination”, according to the summary, “most notably as to why they were driving around with four people in the car (neither of them could explain why they were all in the car or where they were going!).”

After giving evidence, and success looking increasingly unlikely, the law student offered to discontinue his claim on a ‘drop hands’ basis, meaning parties agree to bear their own costs. This was rejected. He then offered to pay £3,000 towards the insurers cost and return the £2,300 he received as an interim payment — again this was rejected. The summary speculates that both offers were made in a bid “to avoid a finding of dishonesty given that he is a student studying for a law degree”.

The judge eventually rejected the claimants’ “wholly incredible and inconsistent”, finding that the law student had “deliberately induced the accident”. The claims, described as “fundamentally dishonest”, were dismissed and the law student was ordered to repay the interim payment of £2,300.00, plus interest, and the defendant’s costs, assessed on the indemnity basis.