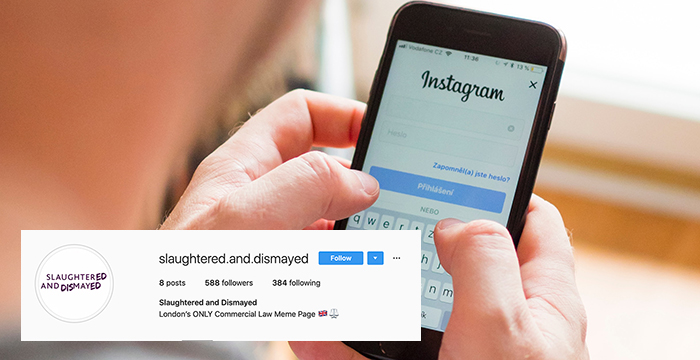 Slaughter and May has distanced itself from a corporate law-themed meme page which until recently used a modified version of the magic circle outfit’s logo.

Launched just over a week ago, the account appears on Instagram under the username ‘Slaughtered and Dismayed’ and describes itself as “London’s ONLY Commercial Law Meme Page ?? ⚖️”. The page, as its description suggests, takes a satirical (and an occasional brutally honest) look at life as a City lawyer through the medium of memes.

The page had, until recently, used Slaughters’ distinctive logo, adding additional letters so it now reads ‘Slaughtered and Dismayed’. The account’s profile image has now been changed to one which bears less of a resemblance to the firm’s logo. Slaughter and May confirmed it has no connection with the account.

In his natural habitat, the solo LSE final year casts his eyes onto the dance floor, in the hopes of finding his prey. Fuelled by Sainsbury’s basic Gin and a £14 double Redbull Vodka, his savvy eye scans the immediate region, until they stop, with his eyes fixated in one position. Target acquired. The vile beast has locked eyes with his natural target, a Media & Communications student visiting London from Birmingham for her best friend’s birthday. Slowly stalking his potential prey, he prepares the, in his mind, imminent feast by bringing up the latest Legal Cheek article stating his future firm’s base salary rate and potential total compensation package. For good measure, the LSE final year brings up his LinkedIn profile, knowing fully that he has no unique personality traits. Both will certainly come in handy when the target’s interest naturally wanes. Despite being rejected verbally, physically, and reviled by any potential parter that he approaches, the LSE final year student continues his quest to find a suitable mate for the evening.

A post shared by Slaughtered and Dismayed (@slaughtered.and.dismayed) on Oct 9, 2019 at 4:50am PDT

The account, which is fast-approaching 800 followers, has so far shared eleven images, touching on subjects such as the US-driven MoneyLaw movement, life as a vac schemer and partners taking the credit for associates’ work.

Richard, known as Dicky among the other Partners, recently lateraled from Freshfields and is heading the Private Equity team at his new firm. Despite only being at the firm for two weeks, he is the first person to walk into the signing meeting. All eyes are on Dicky, sporting a impeccably cut Brioni suit, Alexander Ferragamo loafers, and a fresh Patek Phillippe Nautilus that he picked up to celebrate his recent move. Dicky does all the talking in the room, but often gets up to stare out of the window with his hands behind his back after he directs a technical question to the lowly Senior Associate who is currently getting a divorce due to billing as many hours as possible with eyes only on Partner track.

Speaking to Legal Cheek, the account’s creator declined to divulge their true identity — or even confirm if they were a lawyer — amid fears it could stifle their “creative freedom” or “jeopardise” their career.