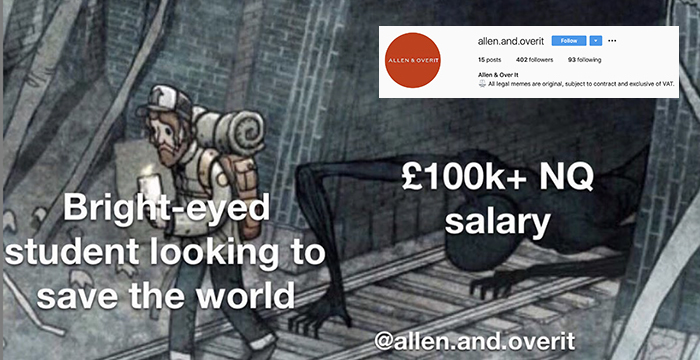 There’s a new Instagram account poking fun at life as a City lawyer through the medium of memes.

The ‘Allen & Over It’ page, which uses an adapted version of Allen & Overy‘s logo, takes a satirical swipe at the legal profession’s treatment of law students, trainees and junior lawyers.

In one meme, the account’s anonymous author pokes fun at City law firms’ commitments to protecting the environment and the “trainee forced to print 900-page bundles everyday”.

“We are actively engaged in limiting our carbon footprint as well as going paperless where possible. We only represent 50% of the oil and energy sector and one of them is firing us soon so we will advertise that as us refusing to work with them. Paper usage is a big problem for us. That’s why we’re happy to announce that we will be planting one daffodil for every acre of rainforest we destroy with our excessive printing. That’s 7 daffodils a day!”

In another meme using a scene from the US version of The Office, the page takes aim at law firm hiring policies when it comes to Graduate Diploma in Law (GDL) students.

“I loved history at A-level and really thought that I could make a career out of it. Turns out, after leaving uni there wasn’t much out there for a modern day historian with a 2:2. Weird. Anyway, after some panic googling of “make money online” and “high paid jobs fast”, I came across the GDL. One year later I accidentally got a training contract because I applied while all of my friends were doing it in between exams haha. I think the partners liked me because I brought a fresh perspective to a career other people have trained to pursue for years lol. Don’t really know what all the fuss is about tbf.”

The page also takes a pop at law students who update their LinkedIn pages with “incoming insight day attendee”.

“My future employers need to see that I live and BREATHE the law. As do my 500+ connections that offer me little insight into the profession as most of them are recruiters. If anyone sees that I didn’t work over the summer after sixth form I’ll never get into the magic circle. Languages? I have 5 ‘limited working proficiency’ languages on my page because I’ve been on holiday to all of them and know how to order a pint. As for endorsements, my friends and I have all endorsed each other for our organisation and Microsoft office skills. That will make a big impact. Oh, and I once sat in a high street law office for 9 hours a day over a two week period making coffees, that’s going in there. Transferable skills.”

And the mega six-figure-salaries drawing wannabe lawyers away from more socially-conscious ares of the law such as human rights.

“I think human rights law is the right step for me. I know that it doesn’t always pay so well but I’ll be making a real difference… You’ve got to have options though. I’ll just apply for Clifford Chance in case things don’t work out. I probably won’t get it haha. If I did, I would donate most of my money to charities. If anything, I hope the government tax me more haha. Fair is fair after all.”

This isn’t the first corporate law-themed meme page to grace the pages of Legal Cheek — or the first to cheekily use the name/branding of a magic circle law firm. Last year, we reported that Slaughter and May had been forced to distance itself from an account called ‘Slaughtered and Dismayed’, which, like ‘Allen & Over It’, uses memes to poke fun at the profession.

In his natural habitat, the solo LSE final year casts his eyes onto the dance floor, in the hopes of finding his prey. Fuelled by Sainsbury’s basic Gin and a £14 double Redbull Vodka, his savvy eye scans the immediate region, until they stop, with his eyes fixated in one position. Target acquired. The vile beast has locked eyes with his natural target, a Media & Communications student visiting London from Birmingham for her best friend’s birthday. Slowly stalking his potential prey, he prepares the, in his mind, imminent feast by bringing up the latest Legal Cheek article stating his future firm’s base salary rate and potential total compensation package. For good measure, the LSE final year brings up his LinkedIn profile, knowing fully that he has no unique personality traits. Both will certainly come in handy when the target’s interest naturally wanes. Despite being rejected verbally, physically, and reviled by any potential parter that he approaches, the LSE final year student continues his quest to find a suitable mate for the evening.

A post shared by Slaughtered and Dismayed (@slaughtered.and.dismayed) on Oct 9, 2019 at 4:50am PDT