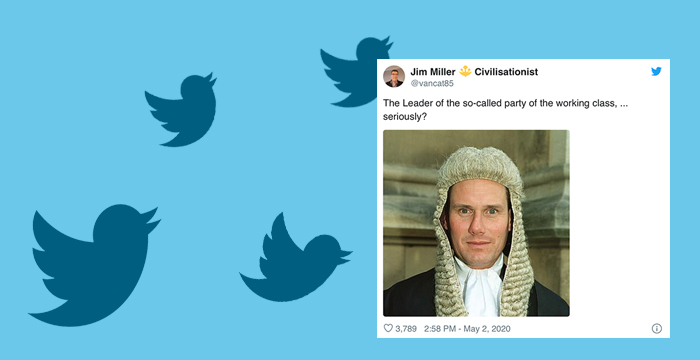 Legal Twitter has hit out after one social media user appeared to question the Labour Party leader’s “working class” roots.

Jim Miller — a “self-employed white van man”, “Brexiteer” and “For Britain party member” according to his Twitter bio — posted a pic of human rights barrister Sir Keir Starmer wearing a full-bottom wig, gown and jabot. Miller captioned the photo: “The Leader of the so-called party of the working class… seriously?”

The Leader of the so-called party of the working class, … seriously? pic.twitter.com/65oKAkU95G

It’s fair to say Miller’s tweet caused quite the stir among the legal Twitterati, sparking over 1,000 re-tweets and countless replies.

“Are you suggesting that working class kids should not aspire to become QCs? Because that is what that picture shows,” fired back David Banks, a media law consultant. Hardwicke‘s joint head of chambers and commercial silk, PJ Kirby QC, joked, “Absolutely — keep the working classes in their place — don’t want them getting any ideas above their station.”

Exactly! A Labour leader as a barrister? Ridiculous idea.

I mean, it’s not as if any previous Labour leaders were barristers.
Or Labour prime ministers.

And if any were; I bet they didn’t have any progressive policies like establishing the NHS.

Criminal silk Di Middleton QC of Garden Court Chambers hit back with a photo of her posing in traditional barrister garb alongside the caption: “[D]aughter of a coppersmith and care home worker, brought up in a council house and went to a comp [comprehensive school].”

Nice one Jim, keep us working classes in our place eh? Ps here's me – daughter of a coppersmith & care home worker, brought up in a council house & went to a comp ? pic.twitter.com/u5wplzeQKF

One barrister, a “proud steel worker’s son” said Miller was “spouting rubbish”, one dismissed the jab as “nonsense”, while another found Miller’s “criticism” of Starmer to be “absurd”, stating:

I grew up in a council house. My childhood was hand to mouth on Social Security. I went to Comprehensive School. I served in the ranks in the Army and now have a degree from Harvard and I am a Barrister. I still think of myself as working class. Your criticism of KS is absurd. pic.twitter.com/y66udiCDGL

A dive into Starmer’s background shows the now leader of the opposition came from humble beginnings. His father was a toolmaker, his mother a nurse. He grew up in Oxted, Surrey, and went on to pass the 11-plus to attend Reigate Grammar School, a state-funded school at the time.

He studied law at the University of Leeds, graduating with a first class honours in 1985, and obtained a Bachelor of Civil Laws (BCL) from the University of Oxford the following year. He joined Doughty Street Chambers in 1987 and went on to specialise in international human rights law. Starmer was appointed QC in 2002, the same year he became joint head of Doughty Street.

In 2005 he won the Bar Council’s pro bono award for his contributions to challenging the death penalty in the Caribbean and Africa. He received a knighthood in the 2014 New Year Honours for his services to law and criminal justice. Starmer won the Labour leadership contest last month, scoring a 56% majority and beating rivals Rebecca Long-Bailey, a former Hill Dickinson solicitor, and Lisa Nandy to the top spot.