In an Instagram post last week, the American singer-songwriter shared a montage of photos with her 20 million followers depicting how she’s spending her time in isolation during the coronavirus lockdown.

Among the seven snaps she shared there was a close-up of Erwin Chemerinsky’s ‘Constitutional Law’. Halsey, whose real name is Ashley Frangipane, captioned the photo series: “Law is fun but hard.” 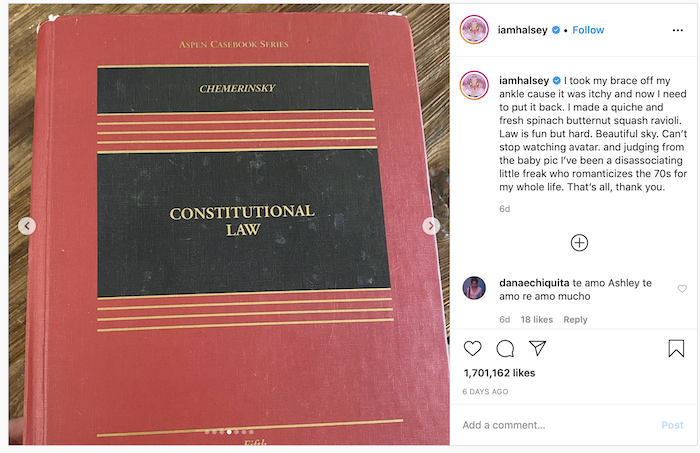 “Why are you studying constitution law? Any reason in particular or general curiosity?” one user commented, to which Halsey, who is perhaps best known for her duet with duo The Chainsmokers in hit 2016 summer soundtrack Closer, revealed she intends to sit the California bar exam.

Other fans praised the pop star for her new endeavour. “You’re doing great things even outside of music,” wrote one, while another said, “I think it’s really cool you have another interest and career to take if you ever decide you’re done with performing. Good on you.” The 25-year-old songstress is vocal about political and social issues on her social media channels.

Halsey isn’t the only celeb to hit the law books. Last year, reality TV star and socialite Kim Kardashian revealed she is studying to become a lawyer.

Kardashian enrolled on a four-year legal apprenticeship with a San Francisco law firm in the summer of 2018, with a view to sitting the California bar exam in 2022. Despite not holding an undergraduate degree, the 39-year-old has been able to make a foray into law as California is one of a number of US states that allow wannabe lawyers to enter the profession via a period of on-the-job learning.

Halsey’s fans think she could be studying for the Cali bar exam “the Kim K way”. One user commented: “In the state of California, you don’t have to go to law school in order to take the bar exam. You just have to find a legal apprenticeship, pass the first-year law student’s examination and then pass the bar. Also, California has the hardest bar exam with only a 54.3% pass rate. Good luck, girl.”