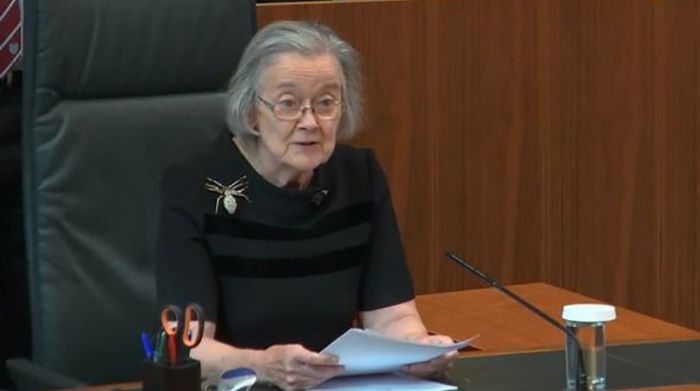 It is perhaps the most iconic brooch worn in recent times. Ex-Supreme Court president Lady Hale’s spider brooch, worn when delivering the September 2019 ruling that Boris Johnson’s prorogation of parliament was unlawful, reached mega-viral fame at the time; inspiring replicas worn by politicians and t-shirts bearing the same design.

Yet, in previously unreported comments that have surfaced in a new book, Hale expresses her regret over the fashion accessory.

“I do regret the focus on the brooch which I was wearing when delivering the summary in Miller v The Prime Minister,” said Hale in a lecture she delivered in December 2019 to mark the top court’s tenth anniversary. “Regular viewers [of the Supreme Court’s live-streamed proceedings] know that I often wear a brooch — usually a creature — to liven up our normally quite sober dress, but that it has no obvious connection to the matter in hand.”

Hale’s comments were not reported on at the time, according to legal commentator Joshua Rozenberg, but now appear in the foreword to the 800-page tenth volume of The UK Supreme Court Yearbook.

Powerful women throughout history have been known to use fashion to convey a secret message or statement, like the time former US Secretary of State Madeleine Albright wore a snake pin after the Iraqi media called her an “unparalleled serpent”.

“Unlike Madeleine Albright, I am not trying to send a message,” Hale continued. “There was no hidden message in the brooch I wore that day, but perhaps I should have foreseen that the public and the media would look for one.”

Last year Hale revealed the jewel-encrusted brooch cost about £12 from Cards Galore. “None of my brooches are worth very much; they are all costume jewellery,” she said.

Hale retired from the Supreme Court in January 2020. Her autobiography, which is cleverly named Spider Woman: A Life, is due to be released in October this year. It charts the personal story of self-professed ‘girly swot’ Hale and how she made it to the UK’s highest court.

Hale’s lecture was published as part of a series by the Supreme Court in 2019. The full transcript of Hale’s lecture is available here.