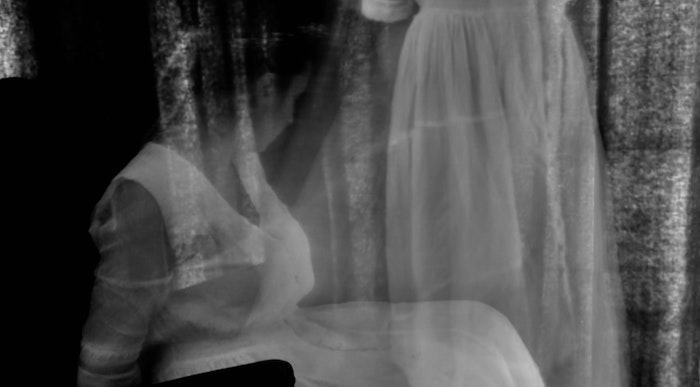 In December 1803, rumours were running rife in London that a ghost was at large in Hammersmith. After 1am, this phantom was said to frequent some fields next to Black Lion Lane, attacking travellers and terrorising villagers. On 3 January 1804, one villager called Francis Smith took matters into his own hands and decided to patrol Black Lion Lane armed with a gun.

That same dark evening, the bricklayer Thomas Milwood had headed out dressed in his brand new white work clothes and shoes that were standard for his trade. Milwood had already been mistaken for the mysterious ghost twice before when wearing his new work uniform. So, as Milwood headed down the poorly lit Black Lion Lane, it was perhaps no surprise that a terrified Smith thought he had found the ghost. Having called to the ghost twice to no avail, Smith became increasing anxious at the undeterred approaching phantom. So, he pulled out his gun and shot Milwood dead.

Smith openly admitted he had killed Milwood but pleaded guilty of manslaughter (rather than murder) on the grounds that at the time he genuinely believed he had shot a ghost. The jury agreed, but the judge remained unconvinced, pointing to the absurdity of Smith’s belief in ghosts. Accordingly, the jury were instructed to either acquit Smith or find him guilty of murder. They found in favour of the latter and Smith was sentenced to death (although significant public sympathy later saw his sentence reduced to one year’s imprisonment thanks to a Royal pardon).

As well as being a cautionary tale for those with very convincing Halloween costumes, the Hammersmith Ghost murder case is legally significant for two reasons. First, it highlighted the absence of a defence for those who in good faith mistakenly believed their acts were necessary — an issue that was only resolved in R v Williams [1983]. Second, it affirmed as that, in the eyes of English law, ghosts don’t exist.

This was confirmed in Lyon v Home [1868] where Mrs Lyon, a spiritualist (someone who believes that the dead can communicate with the living) widow who was convinced by the ‘spirit medium’ (a practitioner who can relay messages from the dead) Mr Home that her dead husband wanted her to gift Home around £3 million in today’s money. The court extended the principle that the relationship between spiritualist and medium was akin to that of doctor-patient or client-solicitor — there was an irrebuttable presumption that one party has influence over the other. Therefore, they found the transactions void on grounds of undue influence. Underpinning this, was the idea that ghosts were “nonsense” and therefore not of legal significance to the case.

Other jurisdictions, however, have not been so certain about denying the existence of ghosts. As we can see in the two aforementioned cases, this is likely to come with legal complications and unforeseen consequences.

Canadian courts have been far less clear on whether the law accepts ghosts exist. In Manitoba Free Press Co. v Nagy [1907], Mrs Nagy sued a newspaper for publishing a report claiming that her property was haunted. As Michael Shortt points out in his excellent review of ghost law in the US and Canada, her argument centred on the contention that ghosts do not exist. Despite the Manitoba Court of Appeal’s explicit agreement with Nagy’s argument (“the Court may … assume that there are not such things as ghosts and that therefore the statement is necessarily false”), the Supreme Court of Canada was far more ambiguous.

It held that “the evidence only admits of one conclusion and that is that the article complained of was false”, offering two possible interpretations. Either ghosts simply do not exist and therefore the report is false. Or, more narrowly, Nagy’s house specifically was not haunted, leaving open the possibility that ghosts could exist in Canadian law.

I wonder how this might have affected a case like 1784773 Ontario Inc. v K-W Labour Association et al [2013]. After selling a house, the seller jokingly made public comments that the house was haunted. A claim was brought by the buyer of the house for failure to disclose that the property was “haunted” during negotiations. This, however, was struck out as there was no evidence (such as unexplained noises etc) behind the seller’s claims. However, if there had been some evidence of paranormal activity, the ambiguity in Manitoba Free Press Co. v Nagy has not definitively closed the route for a claim for failure to disclose the house’s “haunted” quality.

The US position is yet more confused as Shortt and Blewett Lee highlight. In Cooper v Livingston [1883], the Florida Supreme Court ruled that a promise to cure an illness by conjuring spirits was not deemed sufficient consideration. Surely that’s because the Court thought ghosts don’t exist and therefore, in this case, nothing had been promised, you might be thinking. In fact, the claim was decided on illegality owing to the contention that any spirits conjured would be Satanic, thereby violating blasphemy laws.

Furthermore, in McClary v Stull [1895] the children of a spiritualist widow asked Nebraska Supreme Court to invalidate changes made by their mother to her will allegedly on their dead father’s orders. Surely, as in Lyon v Home, undue influence could only be found in the relationship between spiritualist and medium? However, the court invalidated the changes on the grounds that the dead husband had exerted undue influence over his wife.

In a remarkable judgment, the court explained:

“Law, it is said, is “of the earth, earthy” and that spirit-wills are too celestial for cognizance by earthly tribunals — a proposition readily conceded; and yet the courts have not assumed to deny to spirits of the departed the privilege of holding communion with those of their friends who are still in the flesh so long as they do not interfere with vested rights or by the means of undue influence seek to prejudice the interests of persons still within our jurisdiction.”

This uncertainty surrounding the existence of ghosts can ultimately lead to some legal horror stories.

This is highlighted by two cases concerning representations in relation to ghosts. In Nurse v State [1910], Jim Nurse claimed that spirits had informed him that there was a large amount of money buried under an individual’s property. Some money was found and then reburied on Nurse’s advice with the caveat now being that if the money was now handled the spirits would “vanish it all”. The case was brought on grounds of fraud. Similarly, in Burchill v Hermsmeyer [1919], Mrs Burchill had claimed that ghosts had told her there was oil under her land. Mr Hermsmeyer invested a large amount of money to find no oil and sued for fraud.

Although the argument that both these ghostly misrepresentations amount to fraud appears to be the most obvious route to a successful claim, both cases were turned on ghostly misrepresentation. The logic was that a misrepresentation, which is concerned with facts, cannot be made on the subject of ghosts as their existence is uncertain and a matter of belief. As the court reasoned in Burchill: “spiritual communications […] are too unsubstantial a character to be received as representations of fact […] therefore the representations of the defendants must […] be regarded as insufficient to form a basis for relief to the plaintiff”. For this reason, both claims failed and the fraudsters got away with it.

Although the question of whether you deny ghosts exist or not might at first seem immaterial, it is clear that such differences can lead to eery legal decisions. The courts inability to be ghostbusters has developed a curiously haunted jurisprudence. Indeed, as long as they remain elusive, it appears that lawyers on occasion may be called to confront ghosts or even defend their cause.