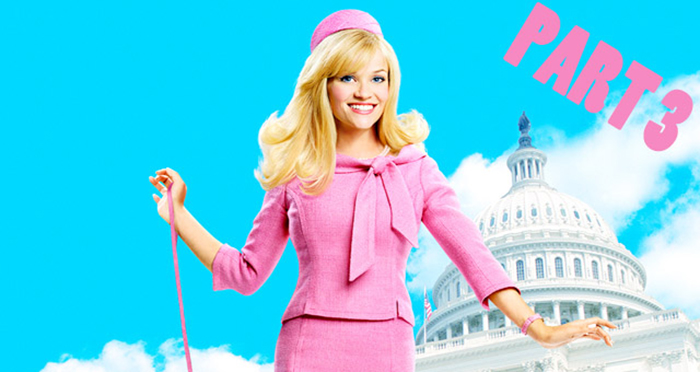 The long-awaited third instalment of Legally Blonde will follow Elle Woods as she juggles her highflying legal career with motherhood, according to a top film executive.

It’s no secret that a new movie is in the pipeline — Legal Cheek first reported on the exciting development back in 2018 — but details have so far been thin on the ground.

Up until now, Woods fans have only been told the new film will star original cast member Reese Witherspoon and will likely hit cinema screens in May 2022.

But further details have now emerged thanks to a recent interview between MGM executive Pamela Abdy and The Hollywood Reporter. She told the US publication:

“It’s really happening. Mindy Kaling and Dan [Goor] are writing it now for Reese [Witherspoon] to star. Reese and Lauren Neustadter are producing with Marc Platt. We’re all developing it together. What does Elle Woods look like at 40? Elle is a mom with a thriving career. We’re looking forward to seeing the script come in sometime in the first quarter.”

A cult classic among wannabe lawyers, Legally Blonde first hit cinema screens in 2001 and followed the exploits of Woods as she navigated her way through Harvard Law School. The 2003 sequel, meanwhile, showed Woods as she attempted to ban testing on animals.