Away from national headlines, a corner of the legal profession is doing extraordinary things not in lucrative defence of oligarchs, but in unpaid support for those fleeing 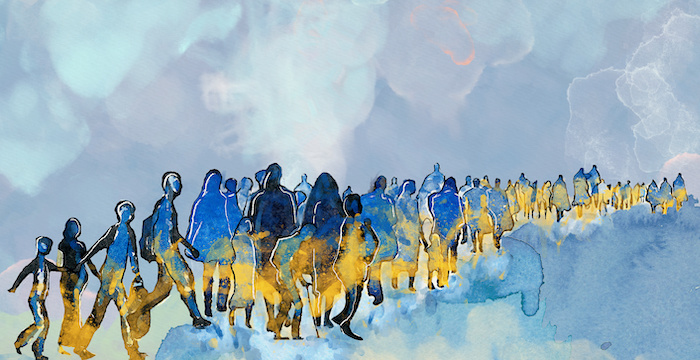 Some solicitors are severing links with Russian law firms, while others are coming under fire for how they represent Russian clients. A few have even been called out in the House of Commons under the cover of parliamentary privilege.

While criticism of aggressive legal tactics can’t be off limits, Lord Pannick is ultimately right that being able to take on profoundly unpopular clients is what “distinguishes our society from Putin’s Russia“.

But it’s fair to say that this association with Putin’s people won’t make normal people think any better of lawyers — whose reputation, as a body, could use a little work.

Polls tell us that a lawyer is considered no more likely tell the truth than the ordinary man or woman on the street. That’s not ideal given that honesty is supposed to be one of the professions’ main ingredients.

Away from the headlines, though, lawyers have been doing some extraordinary things not in lucrative defence of oligarchs, but in unpaid support for the huddled masses of Ukrainian refugees.

For the last week I’ve been helping out with the Ukraine Advice Project, a pro bono initiative connecting Ukrainians trying to find a legal way into the UK with immigration lawyers volunteering their time.

In some ways it’s amazing that any volunteers came forward. Immigration lawyers — particularly those with an asylum background — don’t exactly have time or money to burn.

Legal aid to help with asylum claims is pretty miserly: firms often run those contracts at a loss and cross-subsidise it with their private work. Those with refugee experience are constantly being called on to work for free.

That hasn’t stopped people piling in to help. In less than a week, 325 immigration lawyers — from rookie advisers to top QCs — have signed up to help Ukrainians find their way to safety.

Legal regulators have played their part. Initially we had to turn barristers away, but the Faculty of Advocates and Bar Standards Board quickly issued emergency waivers allowing them to give direct pro bono advice to Ukrainian citizens.

Thankfully, many can now be pointed in the direction of the “Ukraine Family Scheme”, which allows Ukrainians with close family ties to the UK to apply for visas. But not everyone qualifies, and visa applications are inherently faffy — leaving dozens of volunteers to spend their weekend swapping tips on how to get certified translations of Ukrainian documents and whether or not the UK visa centre in Lviv is open on Sundays.

The individual stories of people writing in for advice make painful reading at times. One that stuck with me is the 11-year-old Ukrainian girl whose “father and older brother have been conscripted into military service and she is alone and it is not a good situation. We would like to try to bring her to London to be with her mother, but she is ineligible for a visa under the current rules”. Can she come to the UK to stay with British family friends ready and willing to take her in?

As things stand, no.

“I am a UK national, but my wife is not and is on a spouse visa. My mother-in-law is currently fleeing from the war and we are desperate to get her over to the UK to stay with us but we are not sure whether it is possible to do so”.

“My father has worked on a farm in the UK”: can he come back in?

It’s not like all the volunteers have to deliver bad news: the scheme is generous by normal visa standards, if not in terms of an emergency humanitarian response. But it’s tough going all the same — and certainly a world away from the idea of fat cat QCs gorging on Russian roubles.

Once again lawyers are the unsung heroes

Over the men and women out there on the ground distributing aid, the civilians throwing whatever they can at the enemy and the medics working to save lives under constant shelling?????

I’d rate them over the lawyers.

They are only doing that because they have little else to offer. Can’t blame these heroic lawyers for having professional, useful expertise.

A few years ago, there was a girl in my BPTC group who was born in Kyiv and moved to the UK when she was 12.

Despite having a First in her undergraduate law degree, she was told by another barrister at her Inn that her accent would make it difficult for her to secure pupillage. After many years of trying, she ended up doing a PhD in law and now has a great job at an NGO.

I now have very, very little time for the legal Twitter mob’s hand-wringing.

For those who want to actualy help rather than virtue signal, the Ukrainian Armed Forces accept donations. A simple google search will provide you with all the details.

I had an email from a very nice man who said he was a very honest righteous and truthful prince who wanted to share with me $2,000,000.00

I suggested that he could send it to help Ukraine instead.

I’m still waiting to hear what he is going to do!