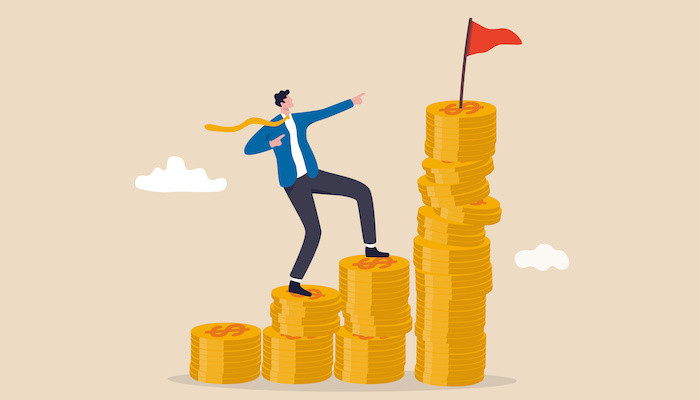 Accountancy giant PwC has upped the salaries of its newly qualified (NQ) lawyers, Legal Cheek can reveal, as firms across the City continue to splash the cash in order to attract and retain the very best legal talent.

The Big Four player, which recruits around 25 trainees each year, confirmed its most junior lawyers will now start on a salary of £90,000. This matches the pay currently on offer at Ince, Mishcon de Reya and Stephenson Harwood, our Firms Most List 2022 shows.

Details of the new NQ rates come just weeks after the firm announced that more than £120 million was being set aside for staff pay rises, “in a move that recognises rising living costs and the competitive recruitment market”.

PwC Legal, as it was known then, first began offering legal services in 2014 when it was granted an alternative business structure (ABS) licence by the Solicitors Regulation Authority (SRA). Two years later it integrated its legal arm into the wider accountancy firm PwC.

Its UK legal business has since gone from strength-to-strength. Fee earner headcount now sits at roughly 400, with its leadership recently setting out ambitious plans to double this in the coming years.

Whaaaat. Well if PwChave gone to 90K… PM, Dentons, NR, ES and DLA had better get the cheque books out again.

What were they before?

Look it up for yourself

Tf id going on? PWC is paying is more than some city firms Lool

The remaining SC and international firms that pay below 100k should hit 100k mark to even qualify as a respectable law firm.

Wow imagine being a real lawyer getting paid less than my PA’s PA.

Kirkland NQ that doesn’t even make sense. The heat has got to you fresher

FFS when will people understand that replying to Kirkland NQ only feeds the troll? Now you look like an even bigger idiot for taking the comment so seriously. If we all ignore him/her, they will inevitably go and find a job lol

If you thought salary banding was bad at city firms, it is worse at PwC/big 4. You won’t see 100k until at least 5PQE.

At PwC a six figure base salary sum is achievable at 2 PQE, not sure about the rest of the Big 4

does anyone know KPMG NQ starting salary? I was recently made an offer.

Big 4 to LC community – a couple years ago when we decided to offer training contracts, you all laughed at us. Well we have to say, you’re not laughing now, are you?

The calculus is definitely changing. The Big 4 smell blood.

Member of the LC Community

Fortunately the LC community is comprised chiefly of cheeky freshers like myself.

By the way, fixed term regional associates at Eversheds earn £47k per annum (regardless of PQE), despite being subject to the same target as permanent newly qualified associates earning £62,000.

I’m hearing from various junior lawyers at the Shed in the regions who have had their pay rise to the new rate deferred so are earning less than NQs and new joiners. Also the bunching is insane. It’s basically £62k for 0-3 PQE and £67k for 3-5 PQE. Expect this will change at annual pay reviews but they certainly haven’t bumped all the PQE bands as things stand.

Yeah the Shed are a joke. They told everybody there would be increases and provided a clear time frame, only to go back on it.

Well they are fixed term for a reason…

The shed will probably increase London salaries, regional dunno though lol. That’s what you get for wanting to work in regions loool.

Hey, at least it’s not like AO and LL

Well that’s your fault for being a regional lawyer loool

Realistically if you’re a regional lawyer, money is not really a priority

You idiots that think you have to be a city lawyer to earn a comfortable living are out of touch with reality. I know regional senior associates earning 80k with bonuses. That is actually a very decent salary in the regions where the costs of living are significantly lower. It is also more than double the national median income.

I think your point probably differs in strength depending on geography – some places (South East, Bristol, Cambridge etc.) are still remarkably expensive. Those guys get seriously penalised if they’re on a flat regional rate with peers in Manchester, Birmingham etc.

Well this is clearly a lie. I’m a regional NQ at the Shed and on £63k which all other NQs who started on September are on..

It is a not a lie. I have had conversations with fixed term associates at Eversheds (I am also an associate at Eversheds) about this. Rather than accusing me of lying, why don’t you ask them yourself?

And why on earth would I make something up that is so specific? The reason I made the comment is because I think it’s unfair and worth flagging. We’ve had multiple fixed term associates leave in a certain department because they were earning 47k before the increase, and were not given any uplift following the increase

Lol if you’re so mad about it why don’t you just leave? No one is holding a gun to your head

Anyone know their regional rate?

PWC is a massive corporation tho. I’m sure they could’ve have afforded this time ago.

Also from the thread it appears those in the regions are always the ones getting short end of stick.

Looking forward to when they overtake us on NQ rates.

I’d like to see whether KPMG, Deloitte and EY will match. NQ’s are watching.

Why work for £20k more for an international firm working you like a dog, which after tax is not much of an increase for crazy hours and working holidays

What is going on?

Be lucky NRF is even on that…

No one rates NRF. They’ll work you like a 🐶 for less than US firms and their culture is shet

What firms from 95k will rise to 100k next? It’s stupid when you think about it. You’re basically on a 6 figure salary on 95k anyways lol

This disproves the comment above that you won’t get £100k until 5 years PQE! Also PWC’s chargeable hours are less than most city firms. Also look at their average finish times 18.30 vs 20:00 or later at some city firms.

Begun, the Pay Wars Have

Jokes on you, fresher.

Most non US firms (looking at you, NRF) have such awful bunching that to be earning even 5k more than an NQ as a 2 year PQE is considered lucky. Big boy moves by PWC here on all levels.

PWC is the Big 1, there is no Big 4 unless the Little 3 Deloitte, EY and KPMG match PWC’s NQ rate.

Increase it Deloitte, EY and KPMG.

Can anyone confirm what PWC’s chargeable hours target is, thanks

There is none. Or none that is enforced or affects bonus anyhow.

Can anyone share KPMG’s NQ offer rate ? I received an open offer.