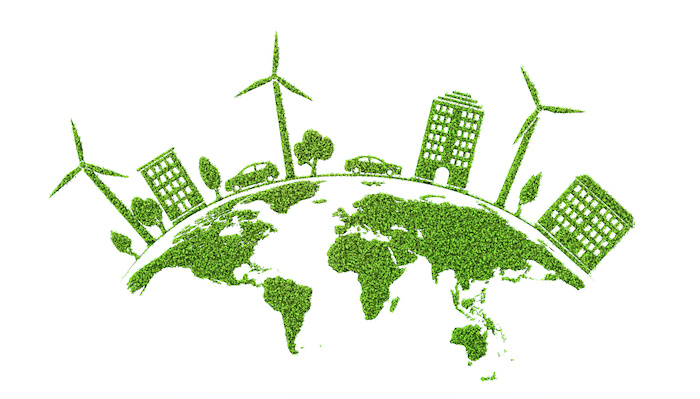 Build back better: you may recognise the slogan from Joe Biden’s winning US presidential campaign or from Boris Johnson’s ten-point plan for a green COVID recovery.

Political point-scoring aside, the phrase encompasses the belief that businesses must now pull together to rebuild and shape a more resilient and sustainable post-pandemic future. The role of law firms in this green recovery was the focus of our latest student event with lawyers from Womble Bond Dickinson discussing their roles in boosting sustainable business. Here are the highlights.

• Jonathan Bower, partner, based in Bristol, and the planning and infrastructure team leader and head of responsible business in the Bristol office
• Vishesh Mhatre, solicitor, based in Bristol, in real estate
• Samantha Pritchard, managing associate, based in Newcastle, in charity law and governance
• Mathew Swift, trainee facilities manager based in the Bristol office and member of the firm’s environmental management team

At the heart of the ‘build back better’ movement is the idea that huge investment into green infrastructure, including renewable energy, will reboot the economy by creating new jobs while strengthening resilience against climate change.

This is good news for Womble Bond Dickinson partner Jon Bower, whose planning and infrastructure team has been at the forefront of renewable energy projects ever since the UK’s first commercial onshore windfarm was built in 1989. From nuclear power stations and solar panels to onshore and offshore windfarms, the team advises land developers needing vital planning permission and other environmental consents.

But with more businesses committing to net zero targets as they look beyond the pandemic to the climate crisis, there’s an opportunity for lawyers to be involved in the “full life cycle” of clean energy projects, said Bower. This means working not just on the consenting process, but also dealing with the financing, construction and, once built, the repowering of projects to increase efficiency over time.

Such energy expertise puts the transatlantic firm in a “prime position”, Bower continued, especially now that Biden’s US administration has re-joined the Paris climate accords, an international agreement to tackle global warming that his predecessor, Donald Trump, exited. Despite being the world’s second largest emitter of greenhouse gasses, Bower described the US as being “a little bit behind where we are in the UK” when it comes to offshore windfarms. Yet, with the market set for huge growth, there’s an opportunity for the firm’s UK-based lawyers to share their expertise and collaborate with their peers across the pond.

Despite a rise in the number of electric cars on UK roads in recent years, charging stations for electric vehicles still seems to be far from ubiquitous.

This could rapidly change, however, following Boris Johnson’s bold commitment to
phase out new petrol and diesel vehicles by 2030, a ban that forms part of the government’s broader plan to reach net zero emissions by 2050. Meeting this ambitious goal — which also hopes to accelerate the shift to electrical vehicles — requires quickly rolling out a nation-wide network of charging points.

But according to solicitor Vishesh Mhatre, preparation has already begun. Based in the firm’s commercial real estate team, Mhatre’s work includes conducting due diligence into suitable sites; arranging leases between the land owner and project developers; as well as drafting wayleave agreements that govern the supply of electricity to charging points. “Cumulatively, it sounds like a lot of work for lawyers — we can only be grateful for that,” he told an audience of over 500 students.

The firm itself has a small fleet of electric vehicles, as well as charging points at its offices in Bristol and Southampton, with further investment in charging locations and their electric fleet planned for the near future. This is a vast improvement on the traditional petrol and diesel only fleet, added facilities manager Mathew Swift.

Such efforts to tackle carbon emissions form part of the firm’s wider green strategy, which includes investment into video conferencing tech, paper-saving printers and processes, energy efficient LED lighting and even sustainable print and stationery products. The firm has also been accredited by The Planet Mark for three years in a row following a sharp fall in its carbon emissions. Added together these can impact the firm’s green credentials, which according to Swift, is paid close attention to by clients.

Emphasising the ‘S’ in ESG

Shareholder capitalism, centred on the belief that businesses should answer only to their shareholders, is at risk of becoming outdated as COVID-19 continues to push environmental, social and governance (ESG) high up on the agenda. Look no further than the wave of businesses now re-examining their supply chains and staffing models to prioritise the wellbeing and safety of employees.

“You’re seeing businesses understand that society will use its money in accordance with its own values and societal priorities. Yes, it might take longer and there might be a short-term impact in taking those kinds of decisions, but I think a lot of people these days are saying, actually we want businesses that we engage with to demonstrate they are socially responsible.”

Stakeholder primacy isn’t a new concept to Pritchard, whose vast experience advising conservation and environmental charities includes the National Trust’s divestment of its £1 billion portfolio from fossil fuel companies. “Any charity that’s taking a business decision without thinking about how it’s going to impact the beneficiaries it was established to serve isn’t going to be discharging its legal duties,” she said.

Where lawyers can add value is ensuring that, from the very start, clients don’t make decisions “in a silo without thinking what the impact is on customers, clients, beneficiaries, whoever it might be,” said Pritchard.

How lawyers help businesses consider the societal impact of their decisions

Law firms aren’t immune from widespread social movements either. According to Bower, clients expect firms to play an active role with the community, with many even measuring social value as part of the tender process.

Looking inwards at Womble Bond Dickinson’s own initiatives, he spoke of one scheme whereby employees can spend two days of the year volunteering with local charities. “In Bristol, we’ve been in the city for 23 years, much longer in other cities. And so, being a core part of that city and community in each of our respective offices is really important,” he said.