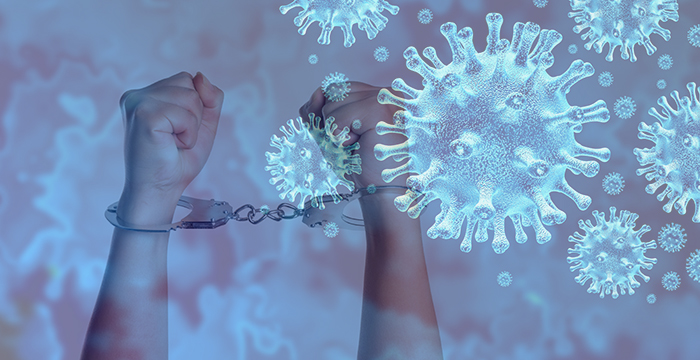 This announcement came on the very same day the Prime Minister announced an end to freedom of movement until further notice. Long before this announcement was given, the government guidance had been for the pubic to practise ‘social distancing’ before being told to stay at home unless venturing out is absolutely essential.

So why is it that the criminal courts had been encouraged to go on as “normal” in direct contrast to the government’s own advice? Why was the Ministry of Justice (MoJ) so readily prepared to risk the health of court attendees by allowing trials to proceed? Why only now, at this time of crisis, are criminal practitioners among those regarded as ‘key workers’?

Over the past few weeks, we have seen that the MoJ has been willing to gamble with the health of the public, court staff and lawyers — urging them to attend unhygienic and ill-equipped court centres to keep the criminal justice system afloat that little bit longer.

How did it come to this?

Before this pandemic was even a twinkle in the eye of the United Kingdom’s foresight, crown court trials, in many cases, were being listed over a year after defendants chose to enter a not guilty plea. Where trial backlogs had reached unthinkable lengths, we can justifiably question whether the criminal justice system can survive further setback in the wake of COVID-19.

In reality, it is impossible to pinpoint the precise cause of the current wreckage that permeates through all crevices of the system, but here a few of the more major problems:

The dramatic reduction in court sitting days over the past decade

Crown court sitting days have been cut by 15% in the last year alone, meaning that despite there being empty courts available for use, benches are not able to sit. A drastic and immediate increase in the number of sitting days is essential to tackle the ever-increasing delays.

The approach of the government angled towards being ‘tough on crime’

Where efforts are channelled towards punishment, rather than prevention means that more and more individuals are prosecuted for crimes, imprisoned, released and re-offend. This is frequently referred to as the ‘revolving door’ within the criminal justice system. The prevalence of knife-related offences is a prime example, having risen by 34% between 2015-2019. Despite the proven success of a focus on prevention and rehabilitation in Scotland, England and Wales are yet to follow suit.

Despite recent criminal legal aid proposals set out by the MoJ to bring about new or increased payments to criminal practitioners in respect of large amounts of prosecution evidence, cracked trials and the review of unused material, these changes are simply not enough to rectify the economic instability of criminal practice.

As many junior practitioners know all too well, brief fees leave little to enjoy post-travel expenses and chambers fees. So where does COVID-19 and the halting of criminal hearings leave those individuals? The ones who often struggle to make ends meet, as so many young criminal barristers do, entirely dependent on the funds that come from their daily court appearances. A payment hiatus might just be the last straw for young criminal lawyers and a mass exodus from the career is now an increasing reality.

Will we sink or swim?

It is too early to fully comprehend the extent of the damage COVID-19 will leave behind but what we do know is that the criminal justice system is already crumbling. If there is to be any chance for survival after this pandemic there must be huge injections of funding to all keystones of criminal justice — the courts, practitioner fees, the police, the CPS. A piecemeal approach will simply not suffice in the current climate.

Amongst the doom and gloom perhaps one positive may flow from these strange and unprecedented times. Following the Lord Chief Justice’s statement of 23 March, “all hearings in the Crown Court that can lawfully take place remotely should do so”. This move towards utilising technology for criminal hearings may well be just what the criminal justice system needs to relieve pressure on the courts in life after COVID-19. It may be a solution forced upon us sooner than expected but could act to mitigate delays, save money and court time.

Claudia-Lauren Williams is an aspiring barrister. She completed the BPTC at BPP University Law School, and will be heading to the University of Cambridge from October to undertake a masters in criminology.