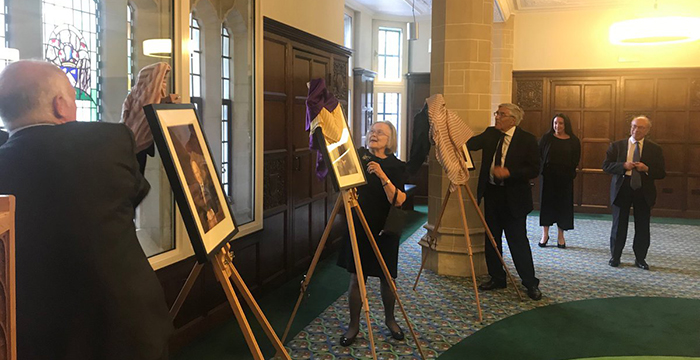 Lady Hale and her predecessors as President of the Supreme Court have unveiled portraits of themselves in the Middlesex Guildhall.

Photographs of Hale, Lord Neuberger and Lord Phillips will greet visitors to the UK’s top court, which is marking its ten-year anniversary, after being launched by the illustrious trio on Tuesday.

Lord Neuberger, Lady Hale and Lord Phillips unveil photographs of themselves at the ⁦@UKSupremeCourt⁩. These portraits of the court’s first three presidents will be displayed outside court one to mark the court’s tenth anniversary. pic.twitter.com/fqlKD8dplS

The portraits were commissioned as part of the court’s 10th birthday celebrations, which has already seen Prince Charles and the Duchess of Cornwall pop in for a cuppa.

The Supreme Court celebrates its 10th birthday on 1 October 2019. Before that, as every law student knows, the UK’s top court was the Appellate Committee of the House of Lords.

Reflecting on the court’s first decade in a recent speech, Deputy President Lord Reed said that the move out of the House of Lords had made the court more efficient and modern, with school visits, live-streamed hearings and an Instagram account (although not quite up there with the world’s most famous legal mind, Kim K).

In a very judicial form of blowout, the court is also marking the occasion with a lecture series starting in November.