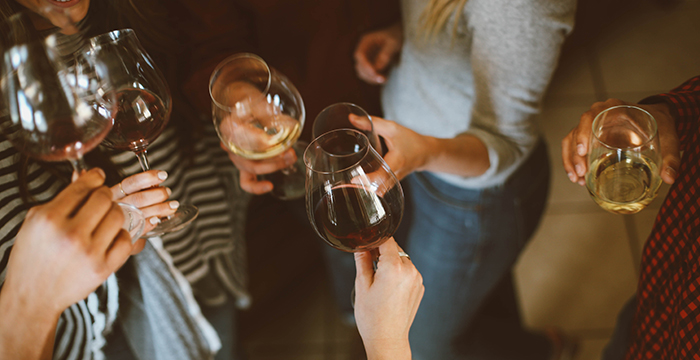 Picture the scene. You’re a Muslim and a teetotaller. You’re a first seat trainee and you’ve been invited to a client wine tasting evening.

Do you politely decline, saying you don’t drink or do you go along as an observer and then risk coming across as an ignorant outsider who doesn’t know Chardonnays from their Pinot Grigios? That was the dilemma I faced within months of starting my training contract.

Please don’t misunderstand me. I’m generally happy to be around people who are drinking and whilst at university spent many evenings nursing or playing taxi driver to friends who had one snakebite too many. But the big difference then was that at no point did my friends twist my arms into even taking a sip of alcohol.

But as a fresh-faced trainee who grew up in Luton and the first in my family to go to university I was desperate to impress. I felt immense pressure to fit in and worried that both options described above would still risk me being an outcast and in turn result in me falling out of favour with key partners and senior associates. It was a lose-lose situation.

And to be honest as I progressed through the legal profession and then switched to journalism it became worryingly apparent that drunken nights out were the norm. Indeed, nothing got the bar till ringing louder than a social with lawyers and journalists. What’s more I even once overheard a former colleague say behind my back that as a non-drinker I’d never be able to cut it as a journalist. And how wrong were they?

That’s why I welcome the recommendations made recently by the Junior Lawyers Division (JLD) to do away with the boozy culture that far too often prevails in the legal sector and to promote a more ‘inclusive approach’. And I really do hope law firms take heed when planning social activities for vacation scheme students and ditch gin tasting for an activity that does not centre around alcohol.

I appreciate that drinking habits should remain an individual choice and I’m certainly not suggesting that we go to extreme measures by requiring law firms to ban alcohol at all events. But I believe there is plenty of merit in shifting the emphasis away from non-drink related activities to ones with proven links to mindfulness and wellbeing, as per the JLD’s suggestion.

So hopefully no current or future trainee will ever face the same dilemma as me. Besides, who isn’t always up for a game of mini golf or paint balling? By the way, below are my top five tips on how to enjoy a sober work social either without any alcohol or limiting yourselves to one drink:

1. Don’t feel the urge to tell every single guest you’re abstaining, especially if you’re drinking mocktails. Most people won’t even notice. And if they do — it’s absolutely fine to be honest about it but there’s no need to give a lengthy explanation of your reasons for not drinking.

2. Accept the first few times you do this it will inevitably feel awkward. But I promise you — it does get easier. So do try to relax and be yourselves.

3. Sponge on others’ high and fake it — this one is definitely my favourite. I noticed from very early on in my life that when everyone else is drunk or at least tipsy then it’s really easy to pretend you are too. Hardly anyone will notice that it’s all an act and what’s more as a fake you are in full control of your behaviour so there’s less risk of you saying or doing something you’ll later regret.

4. Capitalise on being sober and engage in intellectual but light-hearted conversations, which as an added bonus you are more likely to remember the next day.

5. Remind yourselves of the benefits of waking up without a stinking hangover.

Husnara Begum is a career coach and outplacement specialist with a particular focus on working with final seat trainees and junior associates. She will be speaking at LegalEdCon 2020, a day-long virtual conference on Thursday 14 May.