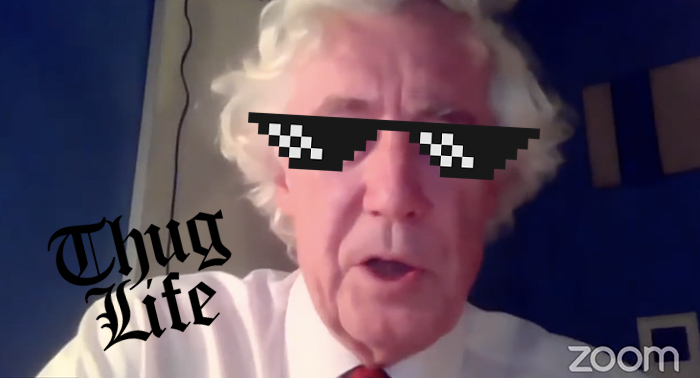 Lord Sumption wowed a virtual audience last night with a hard-hitting attack on the government’s coronavirus policies, accusing ministers of deliberately stoking up fear and acting with a “cavalier disregard for the limits of their legal powers”.

The former Supreme Court justice warned that British society was becoming “totalitarian” and argued that the government had no power to pass lockdown regulations under the Public Health Act.

Sumption has been a leading lockdown sceptic for some time but last night’s speech marked an escalation in his warnings of the dire consequences of “government by decree”.

Delivering an online lecture organised by Cambridge University, Sumption warned that “the British public has not even begun to understand the seriousness of what is happening to our country”.

But the 71-year-old doesn’t seem to be experiencing much tyranny himself. Introducing him, Cambridge don Sarah Worthington revealed that Sumption had recently been spotted “cycling through the vineyards in northern France” and was giving the talk from Milan via Zoom.

The silk took an hour off from living it up to warn that the government setting sweeping restrictions without the involvement of a “relatively supine House of Commons” was a democratic disaster. Sumption said:

“The sheer scale on which the government has sought to govern by decree, creating new criminal offences, sometimes several times a week on the mere say-so of ministers, is in constitutional terms truly breathtaking.”

Sumption’s legal argument was that lockdown laws are unlawful in their current form. He pointed to the famous case of Ex parte Simms, where the House of Lords held that “fundamental rights cannot be overridden by general or ambiguous words” in an act of parliament.

The government has passed the main lockdown regulations under the Public Health Act 1984, which does contain a power for the government to make regulations to fight infectious diseases, but it is “couched in wholly general terms”. Relying on that act to authorise sweeping control over healthy people’s lives, Sumption said, is inconsistent with the principle of legality in Simms and so the regulations could be quashed on judicial review.

But his main theme was about the dangers of meekly accepting government by decree even with a national emergency to justify it. To cheers in the YouTube comments and on Twitter, Sumption declaimed:

“This is how freedom dies. When societies lose their liberty, it is not usually because some despot has crushed it under his boot. It is because people voluntarily surrendered their liberty out of fear of some external threat.”

And he said that the situation contains the “authentic ingredients of a totalitarian society” and “marks a move to a more authoritarian model of politics which will outlast the present crisis”.

Sumption was delivering an annual law lecture at Cambridge, sponsored by magic circle law firm Freshfields. The text had evidently been circulated in advance, receiving blanket press coverage yesterday long before he opened his mouth.

Watch Sumption’s lecture in full below: