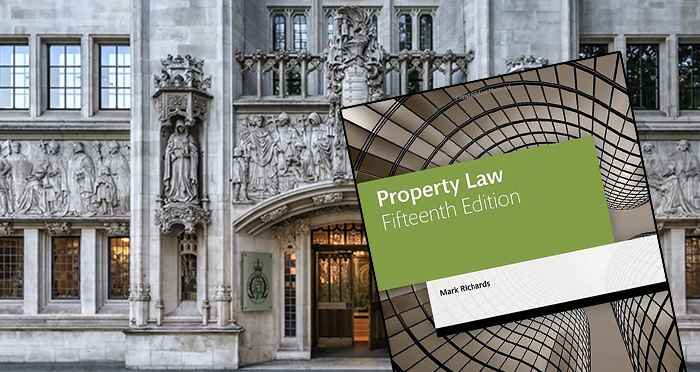 “One day, this will all be yours” has come to be a perplexing promise for judges ruling on English law.

Such an utterance marked both the start of this recently decided dispute Guest v Guest and Lord Briggs’ majority judgment. The appellants were David and Josephine Guest who own Tump Farm which has been in the Guest family since 1938. The respondent was their son, Andrew.

The fact pattern of the case is as close as you can get to an oven-baked proprietary estoppel scenario cooked up by your law school examiners, as those familiar with the legal doctrine will quickly realise.

Andrew Guest left school at the age of 16 and spent the following 33 years working on his parents’ farm. He “worked long hours for low pay” in reliance on a promise from his parents that he would inherit a substantial share of the farm.

But, by 2015, there had been a breakdown in the relationship between Andrew and his parents. Their farming partnership was dissolved and Andrew was cut out of his parents’ will.

Andrew subsequently brought a claim against his parents to enforce the informal promise which is protected by a doctrine known as proprietary estoppel. The requirements for this doctrine are threefold: one must be able to prove that there was a representation or assurance, reliance, and detriment. It was held by the trial judge that Andrew had satisfied these criteria.

But what remedy should Andrew receive?

The Supreme Court was split on this “lively controversy”, as Lewison LJ put it in Davies v Davies, with the 3-2 majority in favour of the expectation loss approach.

The majority offered the parents a choice: either put the farm into trust for the children (Andrew was one of three) subject to a life interest in the parents’ favour, or pay compensation to the tune of £1.3 million (50% of the value of the dairy farming business plus 40% of the value of the freehold land and buildings at the farm) as the trial judge had initially ordered but with a sufficient discount for Andrew’s early receipt to be agreed by the parties (or a Chancery court as a last resort).

Lord Briggs’ view centres around remedying the unconscionability of the promisor reneging on their promise. Citing a long list of cases in which he explained that expectation loss had been the approach taken by the courts, he set out the new approach in a two-stage test in paragraphs 74-80.

First, it must be proved that it is unconscionable, given the circumstances, for the promisor to go back on their promise. Second, there is the assumption (not presumption) that enforcing the promise should be the appropriate remedy unless the promisor can assert and prove that this would be out of all proportion to the detriment.

To illustrate this second point, he gives the example of a carer who is promised that they will inherit an elderly lady’s jewellery in return for their poorly remunerated services and it turns out that the jewellery is a Faberge worth millions.

Importantly, however, Lord Briggs stresses that this does not mean the court will seek to compensate the detriment in lieu of enforcing the promise. In short, forget using the reliance loss approach!

The reason this case, however, lends itself especially well to classroom discussions and essay questions is thanks to Lord Leggatt’s dissenting judgment.

Lord Leggatt’s view of proprietary estoppel (a term he says is “a misnomer and liable to mislead”) centres on remedying the detrimental reliance suffered rather than the unconscionability of going back on the promise.

In his view, the court should either enforce the promise (or an equivalent payment) or provide an award that is sufficient to compensate the reliance loss, selecting the minimum award necessary to avoid the promisee suffering a detriment in reliance on the promise. Accordingly, Lord Leggatt would have awarded Andrew £610,000 based on an estimation of what he would have earned if he had worked elsewhere.

These two contrasting judgments raise several interesting themes in relation to remedies for proprietary estoppel for law students to mull over in essays.

First, it appears that Lord Briggs’ approach goes some way to act as an exception to the usual requirements for contract formation. A legally binding contract requires clear and certain terms, intention to create legal relations, and consideration. In short, not any old promise can become a contract. But in proprietary estoppel cases, the promises need not be certain or clear, nor need there be intention to create legal relations.

Yet, following Lord Briggs’ judgment, the law now awards a remedy based first on expectation loss, as is the case in contract law. Accordingly, in his dissenting judgment, Lord Leggatt is keen to point out that “a property expectation claim [his preferred name for proprietary estoppel] is not a form of contract lite”.

Lord Briggs also notes the difficulty in determining a remedy in such cases where there is a great deal of emotional harm amongst other things, whilst Lord Leggatt reminds us that such remedies are common in tort law cases.

This brings us to the second important theme of this judgment: judicial discretion. This is an area where Lord Leggatt is clear that “English law needs to do better than this”. He is keen to avoid this area of the law becoming what one academic he cites as a “Jackson Pollock” of case authorities: “A splattering of unpredictable colour on a canvas, where a sense of objective form and predictability has been lost.”

As Lord Denning remarked in Crabb v Arun District Council, “equity is displayed at its most flexible” when applied in proprietary estoppel. But, it would be fair to point out such a degree of flexibility and judicial discretion is arguably necessary given the complexity of the various circumstances.

To give one example, in Stallion v Albert Stallion Holdings, Albert Stallion promised his wife Porntip that she would be able to live in his house for the rest of his life in return for granting him a divorce so that he could remarry. Following Albert’s death, Porntip sought to rely on the promise against the freehold owner. In an unusual remedy, the judge ruled that Porntip would not be granted exclusive possession, but was entitled to occupy the property rent-free for the rest of her life alongside the late Albert’s second wife Lilibeth who now occupied the premises along with a new husband and daughter!

Although the Supreme Court has now settled this “lively controversy” in Guest v Guest, such a bold dissenting judgment from Lord Leggatt will undoubtedly tempt some to rely on his arguments in the future, including some daring students looking to score top marks!

Undermining documentary formalities for the creation of property rights is too socialist for my liking.

Legal Cheek used to be ok

Wait – an interesting and informative article? Am I on the right website?

William always used to deliver good stuff, until he was taken on full time and bought into the tabloid style. Glad to see a return to form before he’s forced to churn out another article on salary wars or a trainee that forgot to wash their hands in the loo.

We want to know more about:

– Un-PC comments or tweets things by old buffers that have cost them their careers;

– The latest news from the lives of Barrister Henry Hendron and the Lord Harley of Counsel!

Another great article Will.

Apparently there are four types of estoppel. According to some journal article I read once anyway. I just know it as the detrimental reliance thing though.

I do use that a fair bit as a defence to breach of contract. It’s pretty straight forward there “You told us you didn’t mind if we got a new builder.” etc.

I did have a case once though involving a christian community who lived by reference to certain bible verses. In effect they felt the couldn’t hold personal property; it all had to be in common. Sorting out the breakup of the group got a bit messy. The judge though said his job was to interpret the law, not the bible. So he just applied normal equity rules.

Ended up with that “minimum equity” thing. In effect a cash payout for the people whose name wasn’t on the actual title.