The PM is an honorary bencher. Some ‘do-gooder’ needs to put a stop to that, says mature law student Laurence Cooper 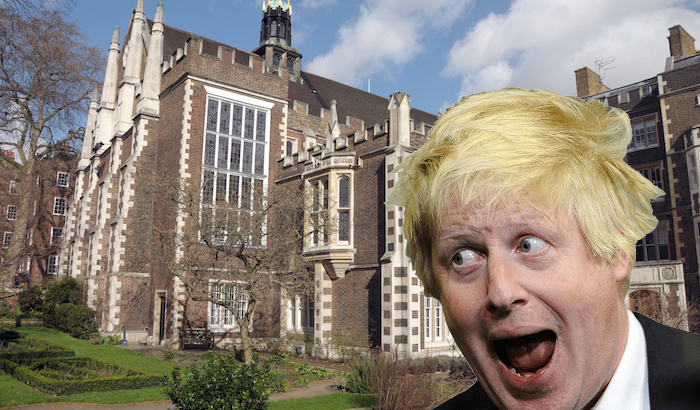 Not many masters of the bench of Middle Temple are famous for wanting to break the law. Boris Johnson is an exception.

I speak of the Internal Market Bill; a political device that was recently voted down by the House of Lords because it reveals such contempt for international law.

The bill alarmed the international community and caused legal sages, such as Lord Neuberger, to raise warning flags. He described the cavalier attitude of the UK government towards international treaties as “quite extraordinary” and “very worrying”.

Former Prime Minister Sir John Major, speaking at Middle Temple on 9 November, said the issue “cannot be ignored”. He described the bill as having a “corrosive impact on the reputation of English and Welsh jurisdiction”.

Sir John, it should be noted, is also an honorary bencher of Middle Temple, albeit one who is less inclined to endorse attacks against “lefty human rights lawyers and other do-gooders”.

Back in November 2011, when Mr Johnson was first elected an honorary bencher, his copy book was, if not entirely unblotted, at least free of the stain of antinomianism.

Back then, the government had not yet begun to whittle away at Britain’s international standing by concocting perverse, self-harming legislation. Nor had constitutional experts been spooked by the hostile mood-music coming out of 10 Downing Street. All of that was to come.

Back then, senior judges had not been left undefended against allegations of being ‘enemies of the people’ — a toxic calumny injected into the public discourse by the government’s own media outriders. The man behind that “enemies” article, James Slack, is the PM’s new communications head.

Even as late as July 2019, when Middle Temple offered their congratulations to the new PM on Twitter (see below), the pervasive vexatiousness of the executive towards the law and lawyers had been only partially revealed. However, the symptoms were certainly there. One legal observer commented: “Oh, dear. Not something to be shouting from the rooftops, MT.”

Perhaps not. But who can blame Middle Temple for having tried to acquire, through association, some celebrity gloss? In 2011, Boris was a vaguely comic blond chap with an undeclared number of progeny. (Fact check: the failure of disclosure on that point continues.)

As late as July 2019 there was still room for optimism.

Things have changed. This government has established form. The ascertainable facts are disturbing, and — as Keynes noted — when the facts change, it is right to change your mind. Boris Johnson might be happy to enjoy hospitality with the Middle Temple benchers, but he’s a ‘frenemy’ to the legal system. Law and lawyers are but ball and wearisome chain to his ambition. He might eat at your top table; but you are a nuisance. He wants you gone. Such fake friends should politely be shown the door of Middle Temple hall.

Withdrawing the honour may seem a small matter. But such gestures carry significance. By so doing, Middle Temple can demonstrate the primary importance of the rule of the law, plus show solidarity with people experiencing the sharp edge of the executive’s acrid contempt. I have in mind the British Bangladeshi solicitors prejudiced by the hostility shown towards their immigration work.

This is not mere whimsy. There are compelling reasons why the Middle Temple honorific should be withdrawn. Is it right that the Prime Minister should remain an honorary master while his ministers openly, and his anonymous sources privily, diss lawyers who are carrying out essential roles in society?

Indeed, does the situation not, to a degree, contradict the Inn’s own statement of values? In that statement, Middle Temple asserts its ongoing role in maintaining public confidence in the rule of law, in supporting the bar and an independent judiciary. For that statement to be meaningful, the Inn must show intolerance for the undermining and demeaning of these very things. It is real, it is really happening, and it has been picking up pace.

Need more convincing? Behold, if you will, the sustained governmental depredations on legal aid, which results in the denial and delay of justice. Consider the plans to exclude judicial review in delegated legislation. Look at the blatant attempts to shield the executive from scrutiny and accountability. You would need to be short-sighted to miss the signs. Can you see what I am driving at? (The words Barnard Castle appear before my stinging eyes…).

In normal times this would not be an issue. Middle Temple could ‘run with the hare and hunt with the hounds’: toasting Boris one day, and Sir John the next. No one would mind.

But these are not normal times. There are momentous issues in play which affect every person. The sinews of our constitution are under historic strain. As Sir John Major said, the government’s manoeuvring against the strictures of law’s rule are “unprecedented in all our history”.

Middle Temple do not need to overtly criticize Boris Johnson, nor participate in partisan politics, nor agonize over their choice. They should simply stop giving honour to someone who does not, sincerely, honour the law.

A spokesperson for Middle Temple said:

“As an Honorary Master of the Bench of the Middle Temple, in early 2020, Sir John Major was invited to give a Treasurer’s Lecture. The choice of time and the content were entirely a matter for him. The Middle Temple does not express an opinion on political matters although it would, of course, expect that the Rule of Law and independence of the judiciary will be respected at all time.”

Laurence Cooper is a businessman and mature law student, based in the Midlands.