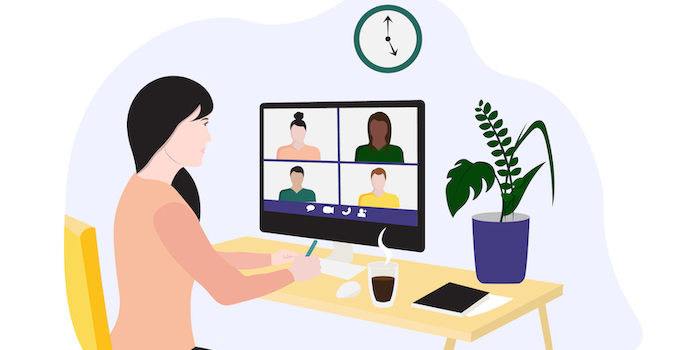 Dreamt up by The University of Law (ULaw), The Legal Cheek Virtual Vacation Scheme took place last week. The first of its kind virtual event, saw four thousand students tuning in to gain insights into life as a lawyer across a range of practice areas through a series of short talks, workshops and Q&As, with corresponding written exercises set by ULaw.

ULaw’s director of employability John Watkins opened the week-long event. He introduced the concept of ‘employagility’; future lawyers that are able to adapt and are prepared to be challenged, particularly important in the context of COVID-19. Watkins also prepared students for what was to come, stating that the virtual format of the vacation scheme will enable them to be creative in their search for a training contract.

The first session of the week, ‘From Lehman to COVID: The coronavirus crisis in context’, was led by Legal Cheek publisher and founder Alex Aldridge. He touched on the uncertainty brought about by COVID-19 and said that the economy will rebound from the period of financial decline, much like it did during the last major recession in 2008. Aldridge advised students to look on the upside:

“When one sector of a law firm is doing badly, another is doing well. There is also growth within aspects of remote-working thanks to the role played by technology.”

The afternoon session focused on the commercial legal market and included a workshop exploring the relationship between in-house and private practice. Dan Kayne, founder of The O-Shaped Lawyer Project and general counsel (regions) at Network Rail and Phillip Dupres, managing associate at Addleshaw Goddard, explained as part of their big picture overview that the legal market, at its core, is the buying and selling of legal services. The role of an in-house lawyer is to understand the commercial objectives of the business and communicate the risks and legal issues involved in any decision to management. The private practice lawyer provides legal advice to clients and may get involved in business development.

Almost a quarter (22%) of the 150,000 solicitors practising in the UK work in-house. This is a growing market that is expected to increase in the coming years, they said.

Further, both speakers highlighted that the lawyer of the future will be ‘O-shaped’. “Clients want an ‘O-shaped’ lawyer who understands the law, is able to build strategic relationships and has the ability to support them,” they added. Kayne and Dupres also shared some nuggets of advice with students, telling them to prioritise their wellbeing, to be curious and open to trying new things.

Fantastic first day of The Legal Cheek Virtual Vacation Scheme – run in partnership with @u_law! ? Our attendees are now getting to know each other in our drinks-themed online social. Which is your favourite Expo booth? ?????☕? #virtuallegalcheek

Tuesday saw the start of presentations on different practice areas.

Ropes & Gray associate Jacob Bennett spoke during the morning session, ‘Life as a debt finance lawyer’. He explained that debt finance covers a range of specialisms including real estate; asset and litigation finance; and leverage and acquisition financing. He described his typical day: “Each day is different, but typically involves drafting, reviewing and negotiating facility and intercreditor agreements and security documents.” He said that trainee finance lawyers manage the conditions precedent process and are involved in transaction management which provides the opportunity for them to develop soft skills at an early stage. Bennett said a highlight of his job is seeing the real-world impact of his work on the national and global economy.

Future finance lawyers were advised by Bennett to keep an open mind when it comes to selecting seat rotations and which department to eventually qualify in. He also stressed that students should identify the type of firm they want to train at and tailor their application accordingly. “You must be able to show a genuine interest in that specific law firm and the market in which they operate,” he summarised.

Tuesday’s afternoon session was on legal technology. Dana Denis-Smith, founder of Obelisk, said “language is important in tech and coding is the latest language”. She advised students interested in lawtech to “garden” their minds by focusing on the three C’s: cultivating curiosity, common sense and creativity.

Catherine Bamford shared her career journey up until the point where she founded tech start-up BamLegal, which helps law firms and in-house teams improve their legal services and how they implement legal tech. Toby Willcocks of UK deployments at Ironclad also shared his career story. Willcocks, who studied law at Oxford University before completing a masters in law at Harvard University, initially intended to become a commercial barrister. His entrepreneurial spirit and interest in legal tech start-ups soon took over, and Willcocks joined Ironclad based in San Francisco in 2016.

‪Bend and snap! City lawyer and yoga vlogger @eloiseallexia has joined us this morning for a virtual breakfast and workshop on wellness at our Virtual Vacation Scheme with @u_law ??‍♀️ #VirtualLegalCheek‬

Following virtual yoga with the attendees Skinner took part in an audience Q&A. She maintained that self-care is essential in order to work at maximum productivity. She also advised students to break down a big goal into specific day-by-day tasks and to trust the process. Skinner treated the application process for a training contract as she did her exams and said she even kept a ring binder containing all of her research.

The ‘Life as a litigator’ session took place on the Wednesday afternoon. Irwin Mitchell associate Chrissie Wolfe talked about her specialism of international serious injury claims. “I spend a lot of time in court with around 80% of my cases being litigated,” she told viewers. Wolfe said that she enjoys the court experience and has many opportunities to travel abroad with her work.

Rajiv Bhatt, barrister at Hardwicke, shared his ‘unconventional’ route to the bar. Bhatt accepted a training contract in 2009 which he said allowed him to gain skills and experience. “It is useful for barristers to understand how cases are prepared as there are many transferable skills,” said Bhatt, who now practises commercial, employment, construction and, occasionally sports law at the bar.

Radcliffe Chambers’ Matthew Mills explained his day-to-day life as a commercial chancery barrister involves giving written legal advice, drafting legal documents, attending mediations and conferences with his clients and, of course, going to court. He said, however, that “it is surprising how much gets resolved outside court” and his job involves “answering real-life problem questions and lots of reading”. He also said that lawyers must “market” themselves by writing articles, preparing talks and attending conferences since the market is becoming increasingly competitive.

Thursday morning’s session was on the Green Economy.

Burges Salmon projects lawyer Tom Gillett explained that his time is divided equally between environmental practice and product stewardship, where the latter is considered to be “a growth area”. Brexit allows for “huge changes” within this space since about 80-90% of environmental law is derived from EU law, said Gillett, adding that students interested in this hot practice area should be aware of the 25-year environmental plan, the move towards net zero carbon emissions under the Paris Agreement, the new Environment Bill and the 2021 UN Climate Change Conference, COP26.

Shoosmiths commercial partner James Wood-Robertson shared his journey from trainee to partner and reflected on how much his work has changed. Wood-Robinson explained that when he started his training contract, he enjoyed projects which helped the environment the most. Shoosmiths approached him in 2017 to set up an infrastructure and energy practice of which he is now co-head. “The sector is much wider now which reflects new opportunities, technologies and a greater understanding of the challenges,” he said.

Norton Rose Fulbright energy finance lawyer, Laura Kiwelu, who appeared on the panel alongside Gillett and Wood-Robertson, explained that because of the nature of her work “no two days are ever the same”. She advised students to improve their commercial awareness and knowledge of practice areas during lockdown.

The day concluded with an employability Expo led by ULaw’s Watkins. He advised students to identify their strengths and weaknesses, manage their personal and professional priorities, develop their legal knowledge and technical expertise, as well as find unique ways to stand out.

Friday started with a workshop on counter-cyclical work, namely restructuring, insolvency and employment law. It was evident from the lawyers’ talks that these areas will be in high demand in the post COVID-19 world.

Squire Patton Boggs (SPB) trainee solicitor Demi Hughes is qualifying into the firm’s employment team. She stressed the importance of being enthusiastic during the training contract — “you never know which area of law you will enjoy, so you should try to make the most out of every seat”. Hughes’ colleague, Oli Ward-Jones, a senior associate in SPB’s restructuring and insolvency team, advised those who may be lacking in legal work experience to “look at other avenues of experience to identify applicable skills”.

The final session of the week focused on legal aid and pro bono in practice. Legal Cheek features editor Aishah Hussain began by stating that “the COVID-19 crisis has magnified the inadequacies of the justice system whereby the most vulnerable members of society are unable to access affordable legal services at a time of increasing need”, before inviting Sam Cottman, director of pro bono and senior counsel at Travers Smith, and Siobhan Taylor-Ward, a Justice First Fellow and solicitor at Merseyside Law Centre, to deliver presentations on social welfare law.

Cottman spoke about his career journey. He recalled working on a domestic violence case and explained how he saw first-hand the impact of deploying legal skills for the benefit of those who are vulnerable. His experiences led him to run a number of pro bono projects. “Being a lawyer is a powerful thing due to your ability as future lawyers to impact society positively,” he said. “This career is a marathon not a sprint.”

Taylor-Ward was drawn to the law after seeing so much “need and injustice” in her community. She said her day-to-day varies and can involve providing people with legal advice and representation in asylum support tribunals or challenging homelessness decisions. Taylor-Ward previously worked on the Hillsborough inquests and said that, although challenging, particularly given the government cuts to legal aid, her work is “very rewarding”. She advised students to be passionate and honest about why this area of law interests them.

The author is a law student at Liverpool John Moores University and a Legal Cheek Campus Ambassador.