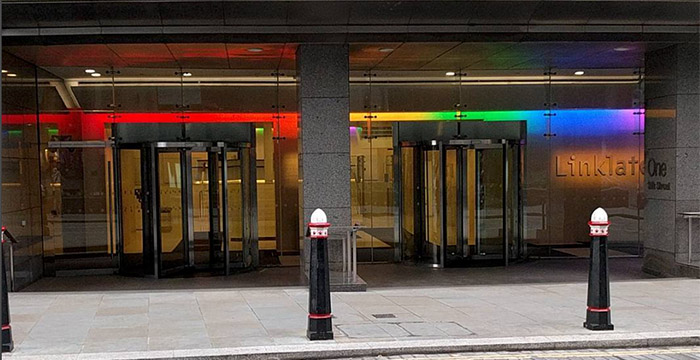 The London office of magic circle player Linklaters has confirmed a spring 2019 retention result of 80%. From a March qualifying cohort of 51, the 30-office-firm confirmed that 41 had put pen to paper on permanent deals.

Those opting to stick around will start on a recently improved newly qualified (NQ) base rate salary of £83,000, while trainee pay currently sits at £47,000 in year one, rising to £52,500 in year two. The firm, which offers roughly 100 training contracts each year, more than any other City outfit, says remuneration for NQs can reach as much as £90,000 with performance-related bonuses.

“We are pleased to once again retain a high number of quality lawyers from our March qualifiers. I look forward to seeing their careers progress as they embark on their roles as associates in a best in class and globally minded firm.”

But how does today’s 80% result stack up against its magic circle rivals’? Clifford Chance revealed an impressive spring score of 90% (46 out of 51) earlier this month, while Allen & Overy and Slaughter and May confirmed results of 83% (39 out of 47) and 97% (34 out of 35), respectively. Freshfields is the only remaining member of the elite fivesome yet to reveal its spring 2019 score.

Turning to life at Linklaters, it scored A*s for training, peer support, perks and canteen, in our Trainee and Junior Lawyer Survey, as well as As for quality of work, tech, office and social life. Its impressive performance sees it shortlisted in no less than six categories at the Legal Cheek Awards, held later this month at London’s iconic Cheesegrater building.

I am looking to treat myself to a new suit. I was thinking of spending £800-£1000 but looking at the market I’m facing £1,200+ for something decent, or there are loads of options for £500 or less off the shelf. Does anybody know or recommend any middle ground options?

Hawes & Curtis have some pretty decent suits for GBP 200-290. If you get the timing right you might be able to take advantage of discounts too!

I do have a CT suit, but I am looking for something better than CH/CT/TM this time (albeit I think the selection, fit options and quality have got better the past 3/4 years)

Mate, nobody in a Hawes suit gets their baps buttered LOL

Honestly? Go to a Lanieri atelier next time you’re in Milan or Paris. Then, you can order the suits from London.

Worth a trip for the purpose of buying a suit? I have a quiet April coming up

Thanks – I had one of their suits before, but I’ll admit I have turned into a bit of a fatty and they don’t let you mix/match trouser and jacket sizes. If only trousers could be let out 4 inches.

Edit Suits is a tailor based in London – depending on the fabric you choose, you can get a suit made for £600 upwards. Speaking from experience, they’re very good quality for the price.

Thanks – sounds the right price point. I’ll look them up.

There are some sound recommendations on this thread.

Thanks, a few good suggestions on there and some comments on recommendations made in this thread.

cad and the dandy, dress2kill

I pass by the shop sometimes while heading to work.

How is it price/quality wise?

Thank you – those prices are Dress2Kill I guess? Cad prices on their website seem to begin at £1k

Suitsupply is great. Not sure C&D is the best for the price they charge, had some questionable service (and quality didn’t seem the best)

I read about similar issues on the link that Paul posted, thank you. It is a shame Suitsupply don’t do mix/match jacket/trousers sizes. One size does not fit all! Also, I assume that means you cannot buy an extra pair of trousers?

Thanks – do you know roughly how much for a two piece suit?

Ede & Ravenscroft, I purchased my latest suit from them. It’s superb.

Surely that would be far above my price range?

Made to measure starts at £1,900 so way over my budget unfortunately

Given your starting salary, (lack of) bonus and the likely number of times you’ll ever need to wear it in your first couple of years (we have a casual dress code, remember?), I honestly would not bother.

Might as well put the same amount of money on red…

Edit Suits are quite good: https://www.editsuits.com. I used them last year.

Is Greenberg Glusk a top firm? I keep hearing it mentioned on here but can’t find out how to apply. What do they pay on NQ?

Nobody gives a donkey where you buy your suit from

Can we rename this post to – “Let’s help Linklaters NQ buy a wardrobe?”

I actually found it all quite helpful (2PQE)

Apart from the mandatory greenberg glusker joke and some muppet wanting fashion tips, this thread is barren.

Shows how irrelevant Links has become in many people’s eyes, nobody can even be bothered to comment on retention or the firm in general. Perhaps this why they’ve resorted to hiring social media influencers. Got to be noticed somehow. ‘Best in class’ lol. Cheap and tacky!

Agreed. Bit embarrassing for links as I’m pretty sure they pay LC good money to publish frequent articles about them. But none of the readers care, apparently.

Say what you want about Slaughters, but at least the article on our retention rate got lots of angry comments about US salaries. This hasn’t even got that.

Lol you’re not even a trainee yet and you think anyone cares about your view on which firms people care about.

^Logically fallacious. In what way does my commenting suggest I think people care what I think? It doesn’t suggest this any more so than any comment made by anybody. I could just as well say to you:

“lol you’re not even non-anonymous and you think anyone cares about your view on my view on which firms people care about?”

I simply made an objective, evidence-based assessment of how much people care about Links (not very much at all, and evidently less than Slaughters).

You aren’t very bright, which is no surprise bearing in mind you probably work for Linklaters. You’ve no doubt got lots of Insta followers though, which is apparently suffice to get a job there nowadays.

Well if you were worried about people believing you had a Slaughters training contract, this display of long winded pomposity which completely misses the point proves it beyond any doubt.

Point is you don’t even have a job yet mate. But you’re talking about ‘our retention rate’ as if you have anything to do with it. It’s a bit sad to be honest. Nothing 2 years of shining shoes for old wannabe aristocrats won’t cure though.

The only one who has missed the point is you. I never claimed I had anything to do with the retention rate, ‘our’ was simply shorter than writing out ‘slaughter and may’. The point was, people cared enough to comment on the article.

Dunno why you’re jumping down my throat because I haven’t started work. OK, pretend I’m an associate if you prefer. Bears no relevance to the objective observation I made.

I think this is a bit unfair, perhaps excluding me being a bit of a muppet using this platform to ask for fashion tips.

I have obviously only been with the firm for two years, but I have had good experiences so far. The work is decsnt quality and you are surrounded by intelligent people. Perhaps we are not headline grabbing, but it is still a good place to work. You can’t blame the firm for putting a bit of cash into attracting applicants – I understand it is relatively low cost.

Can someone recommend a retailer who specialises in women’s suits!! Its international women’s day, show us some love!! We too need to dress smart

Latham doesn’t have seniors, in case it was actually necessary to refute this idiocy.

Can’t believe it took so long for somebody to mention latham. Obsessed

tbh Latham does tick all the boxes…

Is Latham a top firm? I am currently a trainee solicitor at QualitySolicitors Howlett Clarke but may move on qualification. I have completed a company and corporate seat.

Could you un-hide/delete all of the fashion advice posts? I bookmarked this and need to refer back to the helpful advice that was provided.